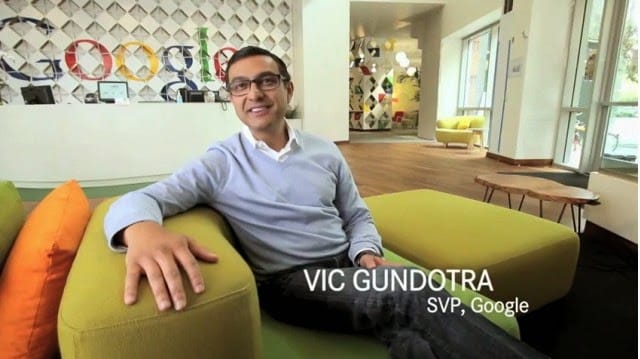 Google’s social chief Vic Gundotra, the man primarily responsible for the Google+ social network, announced on Thursday by saying he is proud of his nearly eight year tenure with Google but that it is time for a new journey.

Gundotra, the creator and mastermind behind Google’s social network,  made the announcement, appropriately enough, in a lengthy Google Plus post, praising his co-workers and saying that he is ‘excited about what’s next.’

“Now is the time for a new journey. A continuation,” he wrote.
Gundotra began his time at Google working on mobile apps, but then focused his energies on launching and fostering Google+, a social network whose level of success mostly lies in the eye of the beholder. Google+ has grown impressively since its 2011 to more than half a billion users. But Google’s accounting of Google+ users is controversial, since many users are not nearly as active on the social network as they are on Facebook .
Gundotra was also responsible for spearheading Google’s annual I/O conference, which brings together software developers and designers.
Gundotra did not disclose any future plans, but clearly suggested that something is in the works.
“I am excited about what’s next. But this isn’t the day to talk about that. This is a day to celebrate the past 8 years. To cry. And smile. And to look forward to the journey yet to come,” he wrote.
Although Google has not formally announced who will replace Gundotra, Re/code reports that David Bresbis, Google’s vice president of engineering, will assume the role. Bresbis, formerly Google+’s engineering director, has been with Google for six years, joining the company from AOL.
Gundotra’s departure is the latest change to Google’s senior leadership team.