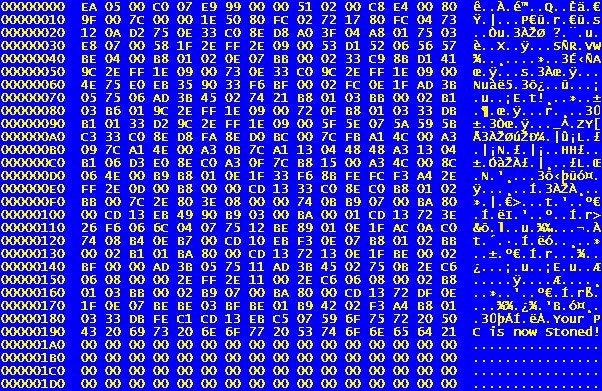 A Microsoft Security Essentials user going under the handle of edc678 has found that  MSE is identifying a very old Stoned virus in his Bitcoin blockchain. He however thinks that MSE is giving false positives and has asked for opinions of other MSE users on the discussion forum here.   STONED is a 27 year old boot sector virus which used to infect DOS machines which use to run PCs in those days.  Stoned is supposed to have originated from New Zealand in 1987.
The users edc678 believes that MSE identifies a virus signature pertaining to the old STONED virus and not the virus itself. When he noticed all it did was pop up a boot message telling the user “Your PC is now STONED”.  edc678 also said in his discussion said that it is highly unlikely that STONED has been inserted into the blockchain and a far more realistic answer would be that some code or string of bits in the blockchain has managed to reproduce enough of the virus’ hexcode to trigger the signature warning in the MSE.
The reason ed678 has put up the above issue on the MSE disucssion board is that his PC gives constant popups thus hindering his work. It seems that Microsoft Security Essentials keeps popping up virus warnings, “as its constant alerts of finding threats in the blockchain is (sic) not only worriesome, but can create panic and negative perception of bitcoin as a whole”.
Though he thinks its a false positive warning and no more than a hindrance he has asked for opinions on the board due a the large number of issues regarding hacking, transaction malleability etc. which has been effecting the crypto currency in general.  He has asked the other users to give feed back on following 3 issues.
a) what MSE is actually detecting is the signature for a virus and not actually the virus itself
b) that there is truly no danger to users of bitcoin simply because of the limitations of the blockchain to carry all the code needed for a virus
and finally he has asked Microsoft to update MSE so that it can and should be updated as soon as possible to bypass signatures found in the blockchain.