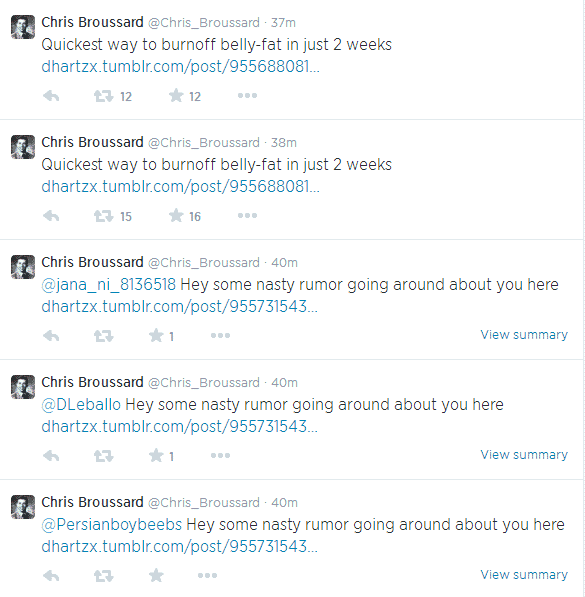 Soon after the hack the Account started posting Spammy Tweets mentioning the followers “Hey some nasty rumor going around about you here” and “Quickest way to burnoff belly-fat in just 2 weeks:.

It did not took much time for the followers to realize that the Account was hacked and they started making fun of it.


.@Chris_Broussard either got hacked, or he is a bonafide Mean Girl.
— Bobby Srivastava (@BSrivastava) August 24, 2014

Can someone tell @Chris_Broussard that he’s been hacked so he doesn’t keep blowing up my timeline?
— Max Flashenberg (@Flash891) August 24, 2014

Tweets continued flowing for more than half an hour, before Chris Broussard sent an apology confirming that his Account was hacked

I apologize to everyone for my account sending out spam. I’m out of the country on vacation and just saw that my account has been hacked.
— Chris Broussard (@Chris_Broussard) August 24, 2014

The Account which had more than 927K followers Before the hack loosed thousands of followers during the period. it is still not confirm how the account was hijacked. but it is possible that it might be a phishing attack, or rogue app which took over the Account.