Some users were Greeted with a message which said “Sorry, something went wrong” 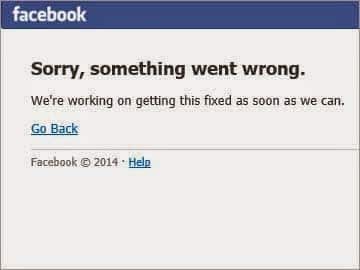 What was next, Twitter was flooded with tweets related to Facebook down time, creating a buzz around the globe making it to the lists of worldwide trend.   Pressing Help also took back to the same page and pressing Go Back also did the same.  The chats were not loading making it difficult for Facebookers to chat with each other.

facebook is down now where do i go for my daily dose of memes and people i hate
— kayla (@Kageyameme) August 1, 2014

Facebook goes down and thousands of people go outside, blinking into the sun.
— tommy tomlinson (@tommytomlinson) August 1, 2014

This is the second major outage in the last two month, Facebook suffered a similar outage in mid June this year.

The Social media Giant is up and running fine now however  Facebook has yet not responded to comment over the downtime.  At the time of writing this article, the Facebook is still giving problems though it is up.