The so called safest place on the internet is reported to have tracked its anonymous users.  Guardian today reported that the anonymous messaging App was not so anonymous at all. In fact, beside gathering data from its users, has also shared on different occasions’ information with the US Department of Defense (DoD), FBI or MI5.

The unique thing about Whisper was that it guaranteed anonymity and privacy to its users. However now it seems that the provider of anonymity itself was gathering and disseminating user information to the law enforcement agencies.

The App which was launched amidst much fanfare in March, 2012, claims to deliver message anonymously.  Whisper is a  iOS and Android mobile app which purports to allow users to send messages anonymously, and to receive replies. Users post messages which are displayed as text superimposed over an image, similar to greeting cards.

Currently, users of Whisper are publishing as many as 2.6m messages a day. Facebook is reportedly developing its own Whisper-style app for anonymous publishing. The trend toward anonymity in social media has some privacy experts concerned about security.

“When users have turned off their geolocation services, the company also, on a targeted, case-by-case basis, extracts their rough location from IP data emitted by their smartphone,” the article stated.

The Guardian found that Whisper is gathering location data during partnership talks last month. Whisper also seems to be monitoring specific, targeted individuals, even if they did not provide the Whisper app with permissions to use geolocation.

After it had researched the tracking abilities of Whisper, Guardian approached for comment last week, Whisper said it “does not follow or track users”. The company added that the suggestion it was monitoring people without their consent, in an apparent breach of its own terms of service, was “not true” and “false”.

But on Monday – four days after learning the Guardian intended to publish this story – Whisper rewrote its terms of service; they now explicitly permit the company to establish the broad location of people who have disabled the app’s geolocation feature.

Guardian article says that Whisper has developed an in-house mapping tool that allows its staff to filter and search GPS data, pinpointing messages to within 500 meters of where they were sent. To back its research, Guardian published the below mentioned images which showed the exact location of the sender. 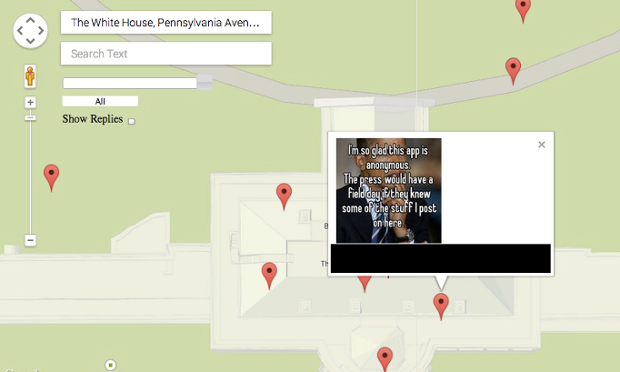 Whisper’s CTO Chad DePue refuted The Guardian’s allegations by claiming, “this is really bad reporting.” DePue claims that they only use a service called Maxmind GeoIP database which according to him is highly inaccurate.  “We just don’t have any personally identifiable information. Not name, email, phone number, etc,” DePue added. “I can’t tell you who a user is without them posting their actual personal information, and in that case, it would be a violation of our terms of service.”

However the Guardian article found many backers. Moxie Marlinspike, security researcher and developer behind RedPhone and Signal mobile applications, replied to DePue’s comment: “Based on your own comments here, it sounds like the [Guardian’s] reporting is entirely accurate.”

Buzzfeed, Whispers long standing partner has broken its collaboration deal with Whisper due to the above revelations. Buzzfeed in a statement said that, “We’re taking a break from our partnership until Whisper clarifies to us and its users the policy on user location and privacy.”

You can read the entire Guardian expose on Whisper here