Google researchers have revealed that they have identified flaws in the Network Time Protocol (NTP). These flaws could let an attacker attack any system remotely. Worse news is that this flaw is being exploited in the wild and couple of attacks exploiting these vulnerabilities have already taken place.  The vulnerability in the NTP allows a remote attacker to execute malicious code and take control of victim’s sytem.

Network Time Protocol (NTP) is a networking protocol for clock synchronization between computer systems over packet-switched, variable-latency data networks. In operation since before 1985, NTP is one of the oldest Internet protocols in use. NTP was originally designed by David L. Mills of the University of Delaware, who still oversees its development.

NTP is intended to synchronize all participating computers to within a few milliseconds of Coordinated Universal Time (UTC) is designed to mitigate the effects of variable network latency. The NTP is maintained and updated by NTP.org

Every computer has an internal clock which needs to be updated from time to time. The logical clock of every individual machine needs to be synchronized with other machines to facilitate communication over a network like the internet. You might have noticed that if your computer time is wrong beyond a certain threshold value, your machine cannot connect to the internet or return an error especially on pages that require time synchronisation. This time is maintained by using the NTP protocol. So we do not need to specify the importance of this protocol.  According to the experts, all the versions of NTP prior to 4.2.8 are affected by the flaw.

NTP.org issued an advisory which explains that a single packet could be enough to exploit a buffer overflow vulnerability in the NTP. “A remote attacker can send a carefully crafted packet that can overflow a stack buffer and potentially allow malicious code to be executed with the privilege level of the ntpd process,” the advisory says.

Attacks seen in the real world

“Google Security Team researchers Neel Mehta and Stephen Roettger have coordinated multiple vulnerabilities with CERT/CC concerning the Network Time Protocol (NTP). As NTP is widely used within operational Industrial Control Systems deployments, NCCIC/ICS-CERT is providing this information for US Critical Infrastructure asset owners and operators for awareness and to identify mitigations for affected devices,” an advisory from ICS-CERT says. “These vulnerabilities could be exploited remotely. Exploits that target these vulnerabilities are publicly available.”

These flaws have been shown to be very useful in remote attacks, specifically a DDoS attack. In a DDoS attack, the attacker floods the target machine(s) by sending a huge number data packets constantly and in succession. By modifying the time on the packets, an attacker can cause the same packet to be delivered multiple times, thus “amplifying” the attack many times over. 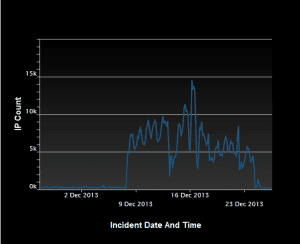 US-CERT has stated that  exploitation of these NTP vulnerabilities may allow a remote attacker to execute malicious code. US-CERT encourages users and administrators to review Vulnerability Note VU#852879 and update to NTP 4.2.8 if necessary.