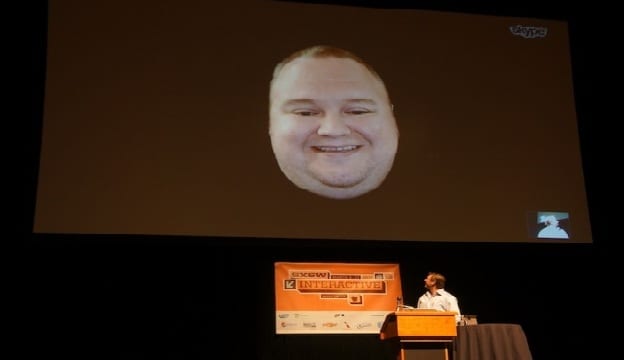 Step aside Skype, Kim Dotcom, founder of file hosting service Mega, is going to blow your back-doors to the NSA out of the water. Kim’s new browser-based video and chat service a fully encrypted end-to-end along with “high-speed” file transfers will be a nice alternative to Skype and its known alliance to Microsoft and the NSA which mandates a backdoor to be incorporated into its binaries.

Kim had back in February 2013 first announced that Mega would be expanding into email, voice, video and “mobile” area. Kim made it very clear that while servers that hold data are on U.S. Soil including Gmail (Google), iCloud (Apple), and Skype(Microsoft) can be requisitioned at any time and for any reason to reveal the private data of its users. The Mega servers are not only purposefully off U.S. soil so the encrypted data is unknown even to itself making any revelation of the user data solely under the users control.

In November 2013, the chat service was originally expected to arrive “in early 2014.” Mega users would be able to exchange messages in real-time with each other and also be able attach files to those messages along with secure audio and video calls.

It is unclear why it has taken so long to get the service out the door, one factor may be the ability to run a service without having to download a separate application or install a plug-in as bundling this with the browser seems to present a few technical hurdles, specifically when attempting to offer end-to-end encryption.

With the current climate and the adamant nature of the U.S. (and other countries) spying through forcing backdoors into their software or just straight up extortion for encryption keys for access to user data. This method of keeping themselves out of the equation and keeping the user in control of their data is the best move I have seen.

It is nice and easy to use, it will not involve any expert knowledge of encryption methods or involve installing additional software or plug-ins. All the dirty work is done for you, you just install it and go. The only way they could make it even easier is to pre-install it on any device you buy, but everybody knows how that works when you have to un-install all the crapware that comes preinstalled with the majority of new systems these days.

The real issue is can it be trusted? Is there some secret agenda with Mega and Kim Dotcom? The likelihood of any secret agenda is very improbable in my opinion. Mostly due to the fact that the powers that be have been hammering on Kim Dotcom with legal complications, draining his capital, freezing his assets and generally making his life a living hell.

I honestly see no reason why he would make their life any easier. Aside from that, the way this service is being set up really removes Mega from the equation of handing over encryption keys…Even if they did have to surrender the servers with the data (assuming the data is even stored, which I am sure this will not be the case), it is still encrypted and any legal authority would have to force the user to give them access to their data. If the legal authority is unable to get the user to surrender his or her password, they will need to brute force it and that will take a while…So it is a safe bet for now, until quantum computing becomes a part of their arsenal.

Kim Dotcom’s above tweet indicates that the Mega Chat may be a invite only affair ala Google style, in the beta phase. Stay tuned if you dont want to miss Kim’s invite to Mega Chat beta version.

I will tweet about beta invites to #MegaChat in the coming weeks. This is going to be THE END of NSA mass surveillance & YOU WILL LOVE IT!