Co-founder and chief executive Jan Koum, revealed on Facebook that the popular smartphone instant messaging service, WhatsApp has reached the milestone of 700 million active users a month since it was acquired by the social networking giant Facebook. WhatsApp had reached a mark of 600 million active users earlier in April, that makes it a 16% jump. He also made the revelation that these users now send 30 billion messages everyday. This make WhatsApp bigger than even Twitter which recorded 284 million users and Instagram which logged up 300 million users recently though WhatsApp’s parent, Facebook remains the market leader, raking in 1.3 billion users. 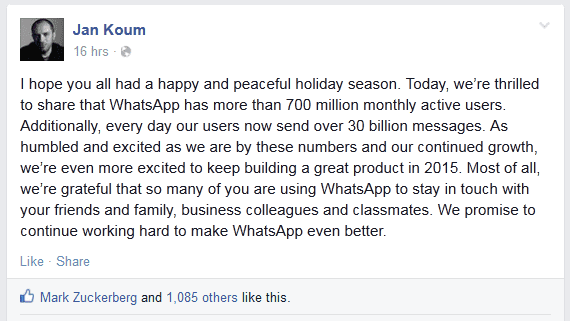 “We’re grateful that so many of you are using WhatsApp to stay in touch with your friends and family, business colleagues and classmates,” Koum wrote.

Facebook has been making its users use the stand alone messaging app to send instant messages instead of using the Facebook app. This has resulted in the Facebook messenger App reaching 500 million active users and taking the second spot. The social giant has now cornered both the top spots as far as instant messaging is concerned.

Whatsapp also made the announcement that it will finally be adding voice calling facility in February of this year. Facebook announced its acquisition of WhatsApp in February 2014 for $19 billion in a stock and cash deal. WhatsApp which was founded in 2009 by Jan Koum and Brian Acton, and raised $58.3 million in funding prior to its acquisition and Jan Koum retained the post of CEO after Facebook’s acquisition.

Facebook meanwhile has been reeling under pressure on its bottomline as its acquisitions are failing to rake in the moolah. Mark Zuckerberg feels that every service needs to reach the billion user mark before it can sustain itself independently.  “Over a five-year time frame,” Zuckerberg said last year, “we have a number of services which we think are well on their way to reaching 1 billion people: WhatsApp, Instagram and search are a number of them. And once we get to that scale, then we think that they will start to become meaningful businesses in their own right.” Not all Facebook investors might agree to his views though.

WhatsApp as of now has managed to stay advertising free but how long can Zuckerberg sustain the cost of managing worlds most popular smartphone instant messaging App without ads or revenue streams is a point to ponder for Zuckerberg and Facebook stakeholders.