Raids on torrent websites sharing pirated movies are in-effective says a new research published by Joint Research Centre.  Big movie giants and copyright protection companies have always resorted to raiding the torrent websites and bringing them down with a hope of putting a stop to piracy.

However they are actually counter-productive says the new research which was initiated by European Commission’s Joint Research Centre. The research actually shows that the effects of such raids and takedowns are short-lived and relatively limited.

In a working paper titled “Online Copyright Enforcement, Consumer Behavior, and Market Structure” researchers examined clickstream data for a set of 5,000 German Internet users to see how their legal and illegal consumption habits changed in response to the shutdown.

The research studied the raid on popular movie streaming portal Kino.to which was taken down a few years ago in the largest piracy related busts in history of Europe. Police officers in Germany, Spain, France and the Netherlands raided several residential addresses, data centers and arrested more than a dozen individuals connected to the site.

At that time the operation wiped out the largest unauthorized streaming portal in Europe and was hailed as a massive success by copyright lobby and movie/media business.

The research now found out that the kino.to raid led to a short-lived decrease in piracy, after which piracy levels returned to normal.

“While users of kino.to decreased their levels of piracy consumption by 30% during the four weeks following the intervention, their consumption through licensed movie platforms increased by only 2.5%,” the paper reads.

Based on the above the researchers conclude that if the costs of the raids and prosecution are factored in, the shutdown probably had no positive effect. 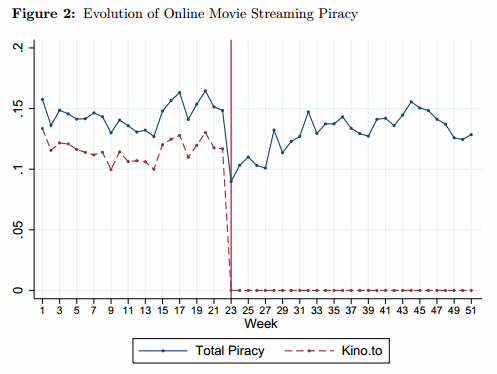 “Taken at face value, these results indicate that the intervention mainly converted consumer surplus into deadweight loss. If we were to take the costs of the intervention into account, our results would suggest that the shutdown of kino.to has not had a positive effect on overall welfare,” the researchers write.

The research states that as soon as Kino was taken down, the streaming space was occupied by several new streaming services thus blunting the purpose of the raids.