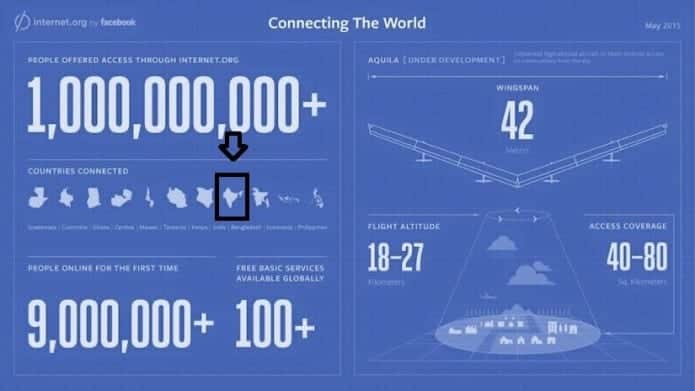 Mark Zuckerberg, CEO of Facebook has outraged a lot of Indians after he posted an infographic leaving out Jammu & Kashmir from the India map. Zuckerberg posted an image about his most ambitious plan to bring Internet.org to the world; however, he forgot to include Kashmir.

With this launch, Internet.org is now available to more than 1 billion people around the world!

Giving people free access is the right thing to do. We will keep connecting more people and more countries, and we won’t stop until every person in the world can connect to the internet,” says Zuckerberg’s post which accompanied the infographic image.

Following the outrage, Zuckerberg removed the post. However, he has not replied to the controversy surrounding the post.

“Great Job, Please correct the Indian MAP on this Picture, Kashmir is Missing,” pointed out Akhil Dev. His comment has almost 2500 likes and over 350 replies.

Manish Kaishav also was quick to remind Zuckerberg to correct the Indian Map.

“Hi Mark, please correct the Map of India as you posted it without Kashmir area which look’s very Controversial , your correction will gain our continues support to you . Thanks .
Manish Kaishav from INDIA,” he says.

Another user, Vivin Varghese Meleadan rectified Mr Zuckerberg’s inforgraphic with the correct map of India and even shared it in the comments section.

However, Amol Swift explained the reason behind not including Kashmir in the map.

“I’m an Indian and this should not offend you! Kashmir is a part which is not completely controlled by our Government. This map shows India with only its parts being controlled by the Government perhaps thats why there isnt any Kashmir in it”, said Swift.

But SK Rao wants Indians to boycott Facebook unless the map is corrected.

“Correct India’s map – Kashmir is missing. Don’t need your free internet. All Indians log off Facebook if the map is not corrected. This is absolute lack of sensitiveness,” he says.

Zuckerberg’s distorted map later reached Twitter too. Meanwhile, there was a controversy on Twitter where a state-run Chinese television channel CCTV carried a map of India without Kashmir and Arunachal Pradesh, which China claims as Southern Tibet.

The Indian Prime Minister, Narendra Modi is on a three-day visit to China. Today, while having talks with Chinese president, Xi Jinping, he raised India’s disapproval to Beijing issuing visas stapled to the passports of Arunachal residents, instead of stamps within.