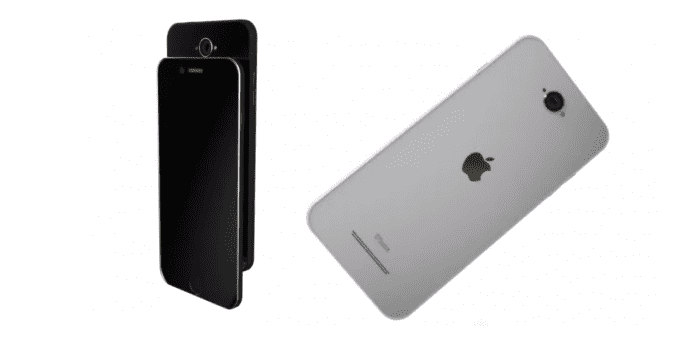 While there is a lot of anticipation around the upcoming iPhone 6s and iPhone 6s Plus, which might be called iPhone 7 or iPhone 7 Plus, or something different, the company itself is apparently preparing for a more substantial product revamp next year.

Jermaine Smit, who is a famous concept phone designer in his video has imagined improvements in this master render of the iPhone 6s/7.

Let’s see what the conceptual iPhone 7 has in store. Apple has brought some major changes to the home button. Besides the fingerprint scanner, the home button now let’s users to swipe back and forward in the menu by means of the iSwipe function. It is also rumored to feature a 1080p display.

The phone is said to be taking benefit of wireless charging via the so-called iCharge setup. This year’s iPhones as per the rumor mill will sport a 12MP dual LED camera. According to the concept featured in the photos and video, the front camera has been improved to 4MP capacity with 120 degrees wide view. Also, the camera design looks different with a pretty sleak look.

The concept video talks about the claimed specs of the upcoming phone duo that includes the improved 2GB of RAM capacity and the new A9 processor manufactured by Samsung.

Other than that, there are also speculations that the company plans to put into effect its new pressure-sensitive Force Touch technology and most likely the larger iPhone will take benefit of the sapphire glass display.

According to Smit’s current iPhone 7 concept, the design of the handset is more or less like the iPhone 6’s. The only exception that it will now have a golden Apple logo on the back along with a golden metal frame in the picture.

On one hand, where Apple is gearing up to launch its new iPhones, Samsung too, on the other hand, is working endlessly on its next-gen flagship device, the Galaxy Note 5.

It looks like the competition is going to be pretty tough, as these three phones are likely to be announced at the same time.