After weeks of much speculation and leaks about the next Moto G and Moto X, Motorola has begun sending invites for events in London, NYC, Sao Paolo and India scheduled for July 28. Several teasers, including “Your relation status is about to change. XGX Moto”, where “G” very cleverly looks almost like an “O,” but it’s clearly a G — perhaps for Moto G, as the X is likely a reference to the Moto X. Another invite says, “A good friend will offer you their umbrella when it rains. A best friend will forever be ready to dance in the rain with you”, which might hint at a water-proof device. 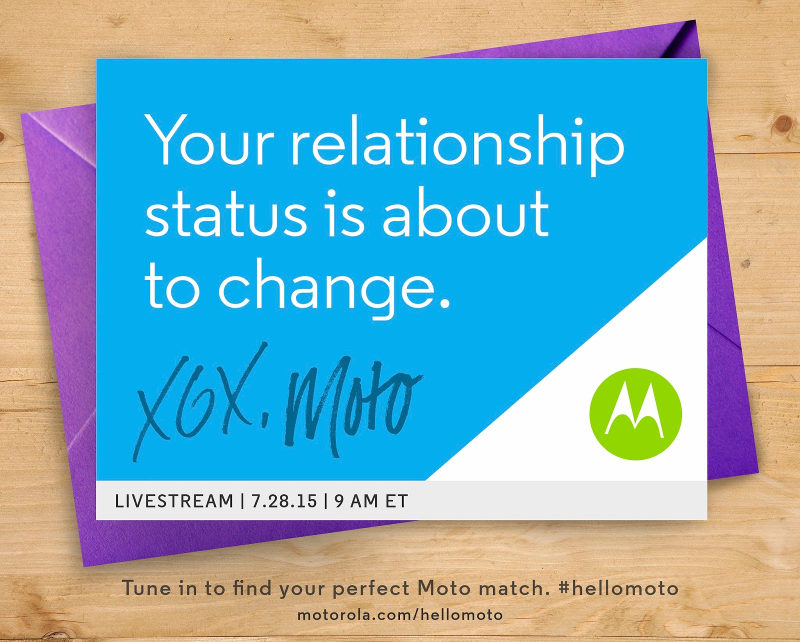 No details were provided as to which devices will debut at the event; however, thanks to the invitation from Motorola, a very good idea of what will be revealed could be guessed.

Let’s have a look at the phones that may be launched:

According to the leaked specs, the new Moto G is expected to feature a 5.0-inch screen with either a 720p or 1080p resolution. It will most likely be powered by a Qualcomm Snapdragon 410 processor. It will be offered with 1GB of RAM with 8GB expandable storage, and 2GB of RAM with 16GB expandable storage. It will probably run Android 5.1.1 Lollipop and be powered by a 2,470mAh battery, which is pretty decent.

It is also expected to have a 13-megapixel main camera and 5-megapixel selfie camera setup. The new Moto G may even get the Moto Maker treatment, so one could choose their own back cover. An FCC filing also indirectly suggested that it will come to Sprint for around $180, but nothing has been confirmed yet.

Based on several leaks, the new Moto X is expected to sport a 5.2-inch QHD AMOLED display screen with a 2,560 x 1,440 pixel resolution, and it might even have a fingerprint sensor. The new Moto X is expected to be powered by Qualcomm Snapdragon 808 SoC with as much as 4GB of RAM inside. While there is no hint that the Moto X will have a MicroSD card slot, it is expected to offer 32GB or 64GB of built-in storage. On the camera front, it may have a 16-megapixel rear camera and a 5-megapixel front facing camera, according to the rumored specs.

Customers will probably still be able to customize the Moto X with Moto Maker, though it is not clear whether new options will be offered or not. The leaked pictures that looks like the back of the Moto X seem to hint that it will look a lot like the previous version of the Moto X, which was considered a real beauty.