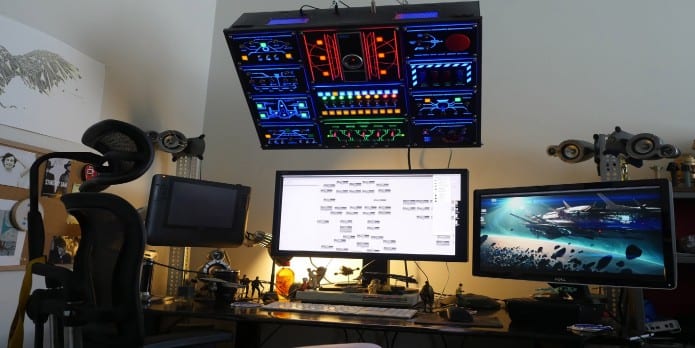 When mortals like us want to launch an App we do it the normal way by clicking on the icon. Similarly, if we want to save a file in Microsoft Word, we either press CTRL-S or go to File, Save, and save it. But Redditor smashcuts seems to have different ideals of running a PC. So he decided that maybe using his keyboard or his computer to perform these actions got a little boring.

Smashcuts has actually made a fully operational, IRL control panel that has a hundred knobs, switches and buttons that can activate all kinds of actions from the useful to the ridiculous.

The end result is extremely impressive and detailed, wherein specific types of functions have different sections devoted to them. For the most frequently used apps by smashcuts, there is a green ‘Main Systems’ section. Further, for controlling like OS shortcuts like Open, Save and Close, it has a central panel along with an other part to control backlight force, to name just a few.

Moving over to labeling, it is very modern with things like ‘Anti-Reality Creator’ for Adobe Premier and ‘Waveform Collider’ launching iTunes. The volume is controlled by the ‘More/Less rock’ buttons, while other stuff like ‘Farting control’ are not explained which is left for your imagination.

Having said that, the foolish name scheme serves a functional purpose too, as it would allow him to replace apps and functions whenever he wants without the lack of compatibility making him go crazy.

It doesn’t get much nerdier/cooler than this Star Wars/Tron/Space Odyssey inspired panel:

Also, there is ‘Panic Control’ with three toggles for de-stressing: According to smashcuts, ‘Hold Steady’ that plays his favorite band, ‘Don’t Panic’ prompts a ‘Hitchhikers Guide’ YouTube video and ‘Serenity Now’ prompts a ‘Firefly clip.

Have a look below to see what the big red button does:

A quick tour of the control panel would have given you an idea about the extraordinary detailed building process. The hardware is controlled by a combination of USB controllers, Arduinos and LED lights.

The enclosure itself is made from a mixture of a laser-etched acrylic glass panels and handout metal junction box.

The image below shows the back of the panel by the time everything was connected, however, smashcuts had to do some troubleshooting afterwards.

However, the end product is very impressive:

It’s a great combination of functionality and ridiculous extravagance.

Check out the full step-by-step photo guide posted by smashcuts on Imgur here.