Google will take between 684 to 2461 years to actually index a “GOOGOL” webpages!

Analysis says to index 1 Googol web pages, Google would take a minimum of 684 years and maximum of around 2461 years indicating it will not happen in our lifetime? But will Google even exist as a company and care about indexing the web pages till that time?

Have you ever wondered, what does “Google” actually mean? Well, Google originally got its name from a mathematical word “Googol” and as per the estimates given by Statistic Brain, Google had already indexed 67 Billion web pages till 2014.

This surely is a very big number and usually it is denoted as follows:

Google has indexed 67,000,000,000; so the question here is till when will Google actually index ‘one Googol’ webpages?

This seems to be quite interesting and involves lots of mathematical equations!

William Harris at the TNW News, took the help of Statistic Brain and Wonder and finally considered the data given by Statistic Brain because according to Wonder till date there is no official count or any statistics of the actual number of pages indexed by Google.

By using the below formula, Harris was able to find the average growth rate of Google’s indexing from 2008 till 2014. The calculations showed that Google can continue at a 35 percent growth rate for a very long time. 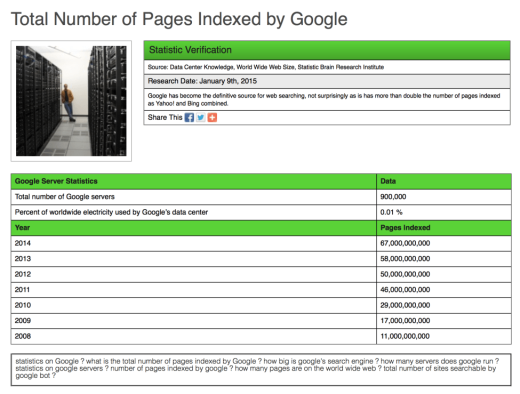 Harris, says he also checked the lowest rate of growth to have a more realistic analysis. According to the data the slowest indexing growth rate which Google saw was between 2011 and 2012. The below calculations indicated that the slowest growth rate would be somewhere around 8.7 percent.

Now the actual calculation which would tell us when would Google actually index a “Googol” web pages:

Based on the assumption that Google would continue indexing at a growth rate of 35 percent, Harris calculated the total number of years required to reach the “1 Googol” level.

Here “y” is the unknown variable and this formula needs to be divided by 67 Billion on both the sides. Now, the formula would appear like this:

Next, by using “logarithms”, Harris tried to solve this mathematical equation:

Using Google, Harris solved this equation and ultimately landed on the value of “y”,

In other words, Google would take 684 years more to index one googol web pages at the growth rate of 35 percent.

Calculating it from the end of 2014, it indicates that the earliest we can see Google achieving its mark of indexing a googol web page would be calendar year 2698! which means definitely not in our life time!

Harris wanted this to be a perfect calculation and according to him, with the ever growing technology it might be difficult for Google to maintain the growth rate of indexing the web pages.

Hence, he even calculated the years required to achieve a googol indexing at the lowest growth rate of 8.7 percent.

Here, the formulae would be same with the only difference it would have to be started with 1.087 instead of 1.35 and thus Harris began his calculations all over again using this equation:

This indicated that with the lowest growth rate of 8.7 percent, Google would take at least 2461 years more to index one googol web pages!

Calculating it from the end of 2014, the earliest we can see Google achieving its mark of indexing a googol web page would be calendar year 4476.

Year 4476 also will be  America’s 2700th Anniversary, or its Vigiseptacentennial (a latin name given by William Harris).

Harris has even given an explanation as to why he suggested the name Vigiseptacentennial:

“Vigi- is from the prefix vigint- Latin for 20, septa- is the Latin prefix we use for 7, and centennial is the word we use for 100 (again from Latin to keep it all consistent).”

All the mathematics indicated that in simple words, in our life time we will never be able to see Google meeting its bench mark of indexing one googol web pages, then be it at the growth rate of 35 or 8.7 percent.

Considering a hypothetical scenario that Google continues to index the web pages at the rate of 35 percent growth rate, then Harris feels that someone might have certain doubts and queries.

So he has tried to give out certain hypothetical questions along with the answers based on his knowledge:

Readers, what do you all think, what will the Internet look like in the calendar year 2698 or 4476? Will Google still exist?

Resource : William Harris on The Next Web.