Intel demonstrate its cutting edge Optane which is world’s first SSD at the IDF 2015. Optane is developed jointly by Intel and Micron as we had reported earlier and is reportedly 1000x faster than the traditional flash memory.  Intel says that Optane will enable much higher performance than NAND flash does and will be made available to the market in 2016.

Intel has not revealed the specifications or details of Optane as it has been developed in top secrecy to protect it from competitors.  Intel stated that it was  seven times higher IOPS (input output operations per second) compared to Intel’s own professional NAND flash drives.

The Optane solid-state drive is based on the 3D XPoint non-volatile memory that gets its own advanced memory controller, interface hardware and software IP. Right now there isn’t any sort of physical interface that can fully use the new 3D XPoint at its greatest potential since modern PCI Express 3.0 and modern PCIe NVMe will only offer limited improvements over present-day NAND flash.

3D XPoint, a powerful alternative to DRAM and NAND flash

It seems the new type of memory has eight to ten times greater density than DRAM, and while not being as fast as DRAM memories, it is a thousand times faster than modern-day storage standard. An XPoint memory chip will store 128Gbits (16GB), which means a 3D XPoint SSD will have the same capacity range as a current SSD using 128Gbit NAND chips that are 1 bit/cell, SLC, or single level cell NAND. 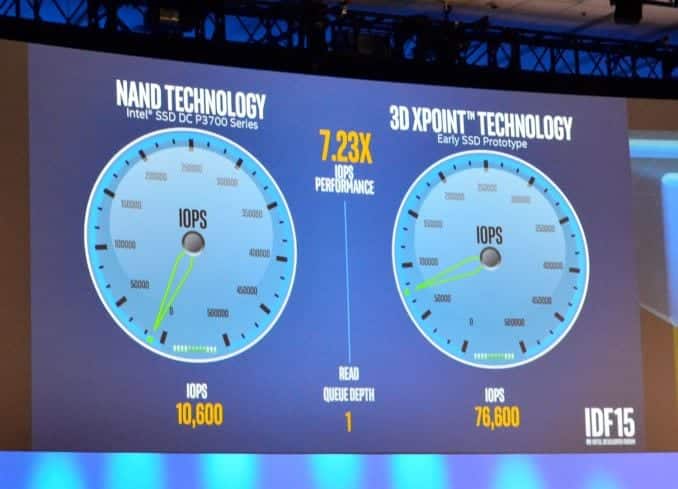 Intel stated that it is working with its partner, Micron and hopes to bring the new high-performance SSDs will hit the market at the start of 2016.  It also said that the new 3D XPoint memory technology will also be used on a new line of Intel DIMM modules for Intel’s next-gen data platforms, most likely the mysterious Purley server system.