UFO on a London road!!! This was witnessed on Friday night when a unknown article was found to be lying on the road. The London police force also got to witness a modern-day miracle Friday night when they apprehended an Unidentified Fallen Object in the middle of a Kingston intersection.

Officers were called by a member of the public complaining about an unknown item on fire near the median strip of a road in Kingston. Officers who warily approached the gaping mouth of the crash-landed thing in the middle of the street described it as looking like a mini-saucer straight from science fiction (or your nightmares). 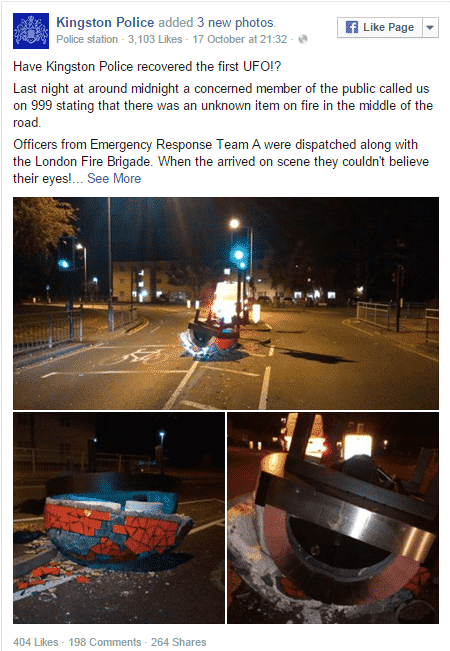 Guesses about the identity of this misfit traffic stop on the Kingston police Facebook page ranged from a satellite to “space garbage” to Humpty Dumpty. If you’re wondering who—or what—crawled out of this spaceship, you’re not alone.

Turns out that the UFO was a pizza oven.

“Officers from Emergency Response Team A were dispatched along with the London Fire Brigade. When the arrived on scene they couldn’t believe their eyes!” it said.

“The officers that arrived on scene described the item as looking like a crash landed UFO!” Further investigation suggested the item could be an upturned pizza oven, but it remained unclear how it came to rest, on fire, in the middle of the road.