It took only a few days for ZTE to make a claim that Google and Huawei copied of its smartphone design after the Nexus 6P was announced. Google had unveiled two Nexus smartphones, a flagship smartphone called Nexus 6P which is being made by Huawei and a budget smartphone model, Nexus 5X which will be made by LG.

Not even waiting for Google/Huawei to begin shipping of its flagship, Nexus 6P, the ZTE’s Marketing Director Lu Quin Hao took to the Chinese microblogging website, Weibo to accuse Google and Huawei of copying its smartphone design. 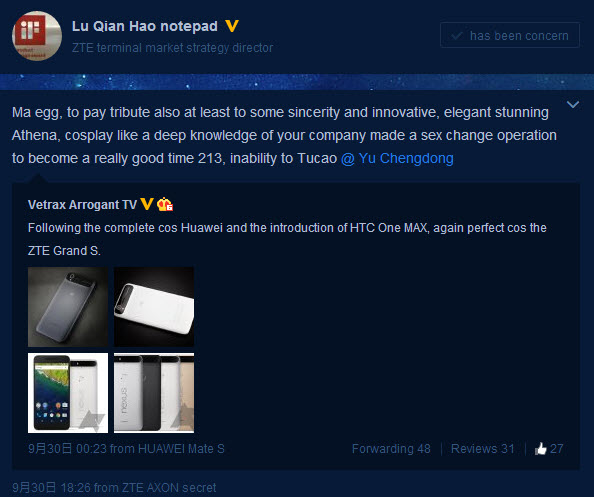 From the looks of it, Nexus 6P and Grand S Anthena seem similar. Other than the looks, Nexus 6P also has a black bar on the back of the device encasing the camera which very similar to the Grand S. However, the similarities end there. The Grand S does not have a fingerprint scanner located on the rear. Neither is it as sleek as Nexus 6P, which is made of metal.

ZTE’s smartphone was launched in 2013 with a 5.5-inch 1080p display, a Snapdragon S4 Pro processor under the hood, and 2GB of RAM on board. While Nexus 6P is yet to be shipped to customers, comes with a 5.7-inch WQHD AMOLED display and is powered by a Qualcomm Snapdragon 810 Octa-Core, runs on 3GB RAM and has Google’s latest operating system, Android 6.0 Marshmallow aboard it.

Till the time of writing of this article, Huawei or Google have not reacted to Hao’s accusation.