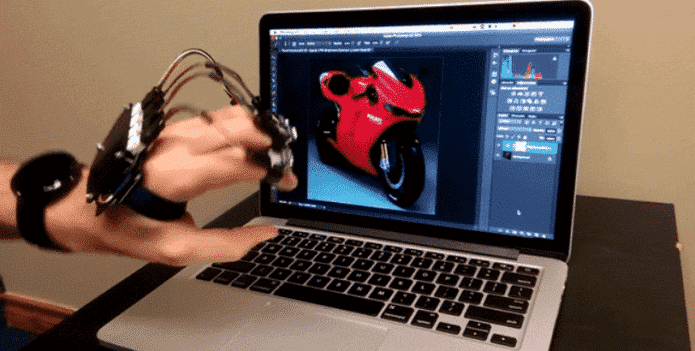 Gest the Nintendo Power Glove will kill the keyboard and mouse

Being hands-off usually means relinquishing control. With Gest, it’s the exact opposite. Gest is a wearable device that straps on to the user’s hand and fingers and replaces the gestures, taps, and swipes a touchscreen device. All in all, Gest if successful will replace both the mouse and keyboard.

Gest comes fitted with 15 sensors that allow the user to interact with a mobile device or computer without the need of a keyboard and mouse. The company behind Gest is seeking $100,000 in crowdfunding on Kickstarter. The company is also offering the digital toolkit to developers and early adopters until the Kickstarter campaign ends.

Gest has one palm strap, plus four finger connectors, each one linked to the strap by wires. The sensors in each of the finger connectors have a latency of approximately 40 – 60 ms for higher accuracy.

For connectivity it has Bluetooth, it also has LED status indicators, and a rechargeable battery that the company says will last through a full day of work.

The controller is designed to learn how the user performs gestures like swiping, pointing, flicking, and grabbing. You can also customize your own gestures for additional controller support. It uses accelerometer, gyroscopes, and magnetometers to determine your finger positions. The company claims that the statistical model used in the device makes it “the most accurate gestural interface on the market today.”

The company says that Gest is perfect for graphic designers using such programs as Photoshop for imaging, or AutoCAD for 3D modeling. At the same time, it is also targeting the virtual reality industry. The company hopes to fill a niche in the VR market with a controller that you don’t even have to hold in your hand because it is just connected to you.

The Gest is also equipped with an API and raw sensor data that users can access for hand position and movement information to create compatible applications themselves.

When two controllers are connected, one on each hand, they act as a replacement for typing. One video demonstration shows how users can simply tap on a desktop in the same way they would touch-type on a keyboard, only there are no keys.