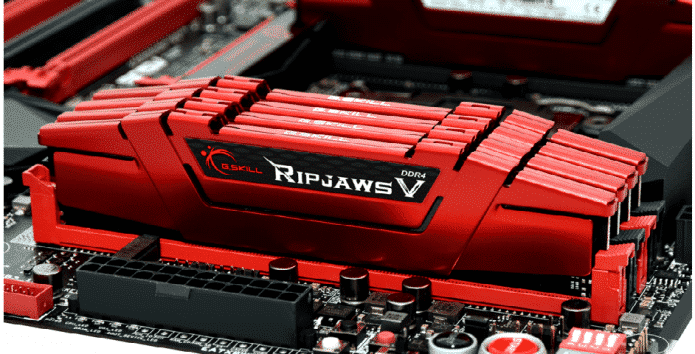 If you own the latest PC hardware, then G.Skill has the perfect 128GB DDR4 memory kit to complement that gaming machine. The company’s latest Ripjaws V lineup has everything good about it, particularly the aesthetics. However, for enthusiasts, aesthetics does not mean a sliver of a thing, but the new RAM kit will definitely be able to perform well too thanks to its blistering clock speeds. According to G.Skill, the company’s latest RAM kit runs at a speed of 3,000MHz (you will still have to overclock the RAM’s frequencies from your motherboard’s BIOS in order for it to run at that speed).

Additionally, the 128GB RAM kit is also running at extremely low frequencies (if you do plan to run them at 3,000MHz); CL14-14-14-34. The bundle comprises up of eight 16GB sticks and will definitely look nice inside your X99 motherboard in order to augment your gaming performance alongside a powerful Core i7-5960X, or even an Intel Core i7-5820K processor. DDR4 RAM modules eclipse the performance of DDR3, which was expected and the largest memory kits that were released in 2015 did not go above the 64GB capacity.

The only detail that G.Skill did not unveil of the RAM modules was its price tag. In order to remind you, you will need some serious cash if you want to purchase these because if you are PC enthusiast, you should recall that G.Skill’s 128GB DDR4 memory kit clocked in at 2400MHz sells for a very expensive $800, which immediately means that this kit is definitely going to be more expensive than the aforementioned price tag.

According to G.Skill, the 128GB DDR4 memory kit is going to be officially launched at the end of the month, after which we should have pricing details for you. We also expect that small RAM kits, ranging from the 64GB, to 32GB packs will be available, so if your wallet does not have the stomach to purchase the 128GB RAM kit, then you can always go for less amounts of RAM.