If you are a gadget freak and have US$13,000 to burn, this world’s first 13TB solid-state drive could be yours. Japanese SSD company, Fixstars on Wednesday announced the massive 13TB called SSD-13000M, which will ship by the end of February.

For the uninitiated, though widely adopted, SSDs available in markets today have no more than 6TB of storage. Fixstars SSD-13000M will more than double that capacity.

Fixstars announced that a pair of exceptionally voluminous 2.5-inch SSD-13000M at 13TB, and the Fixstars SSD-10000M with 10TB of capacity, can now be pre-ordered. The company expects the shipments for US customers to start in late February.

Previous Fixstars drives managed their capacity feats by employing flash memory chips normally destined for use in small-scale mobile devices. This time with SSD=13000M, Fixstars hasn’t mentioned the tech behind the capacity. 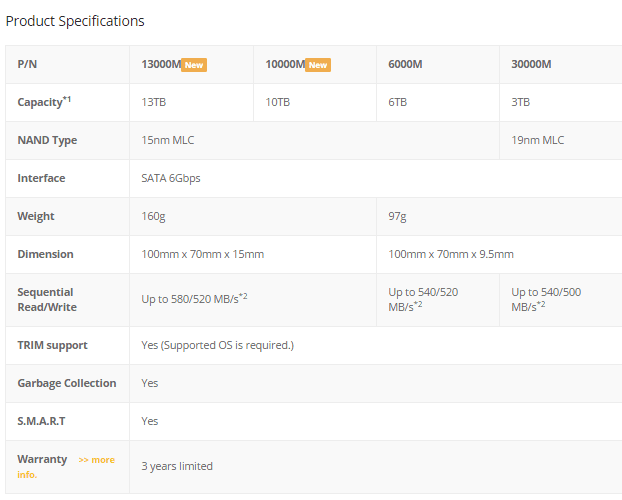 The specs for the new drives, and earlier models in the range are available here. The SSD-13000M comes in 2.5-inch drives at 15mm and weigh 160g. They employ Toshiba 15nm MLC flash and connect via a SATA 6Gbps interface. Fixstars says its proprietary SSD controller enables fast, sustainable I/O performance with read speeds of up to 540 MB/s and sequential write speeds of up to 520 MB/s throughout the lifetime of the SSD. Users get a 3 year warranty.

Fixstars says its hardware/software design will allow constant read/write at the quoted speeds without dropping a beat/frame.