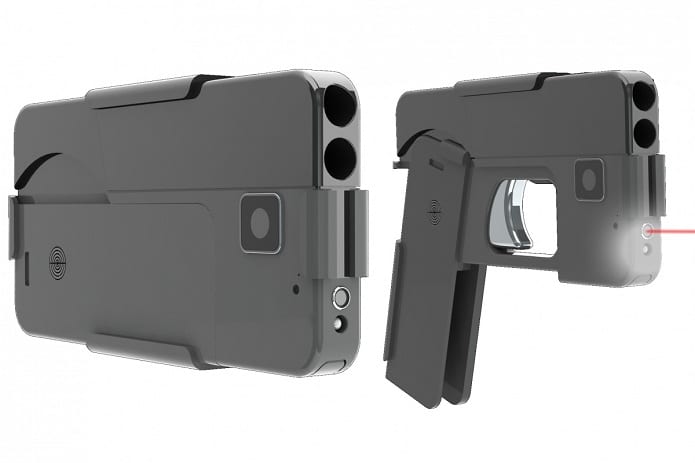 A pistol is definitely not a small weapon that can easily be concealed but thanks to a Minnesota company called Ideal Conceal, the very first weapon that can effortlessly be placed inside of your pocket has been made. Another perk of owning this weapon is that it can be shape shifted into looking like a smartphone.

The pistol has been built into a single frame, and is a .380 caliber weapon that folds down and locks into place when opened. When it is closed, the trigger and trigger guard are completed covered by the grip, which gives the appearance of a smartphone packed inside a case. The company has also attached a bullet clip, but cleverly designed the pistol in such a manner that you will not be able to tell if it is loaded or not.

While the idea is to promote self-defense while concealing the weapon, anyone carrying the handgun will need to check state and local laws related to concealed carry regulations. All 50 states of the United States have passed regulations regarding carrying concealed firearms, some of which require a permit from the government.

The company states the following regarding its latest product:

“The idea for Ideal Conceal follows the present-day demand for handguns that people can carry on a day to day basis, in a manner that makes carrying a gun easy to do. From soccer moms to professionals of every type, this gun allows you the option of not being a victim.”

Currently, the pistol is still under development and is not being mass produced. The creator of the smartphone-styled handgun, Kirk Kjellberg, believes the weapon will be available by mid-2016 and has also stapled a $395 price tag on it. According to CNNMoney, Kjellberg has already received approximately 2,500 emails concerning customers who have shown a keen interest in purchasing the weapon.

Considering its price tag, it is not that bad of a deal, particularly when it can easily be concealed in your jeans.