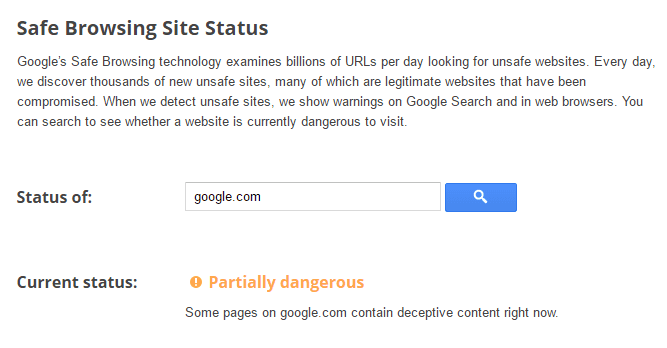 Google warns that surfing on Google.com is dangerous, here is why!

The world’s most visited website with approximate 1.7 billion visitors per month and a Alexa rank of 1 in world as well as United States can redirect users to malware laden websites according to Google’s own admission.

This was discovered by Reddit user who mentioned this on a thread. It warns that “some pages on this website redirect visitors to dangerous [ones] that install malware on visitors’ computers.” The malware, in turn, could steal personal and financial info.

Why Google.com is not safe?

While it may be of concern to some users while others may see it as a bit of irony but the site also gives a logical explanation for the listing.

“Don’t panic. Users sometimes post bad content on websites that are normally safe. Safe Browsing will update the safety status once the webmaster has cleaned up the bad content.