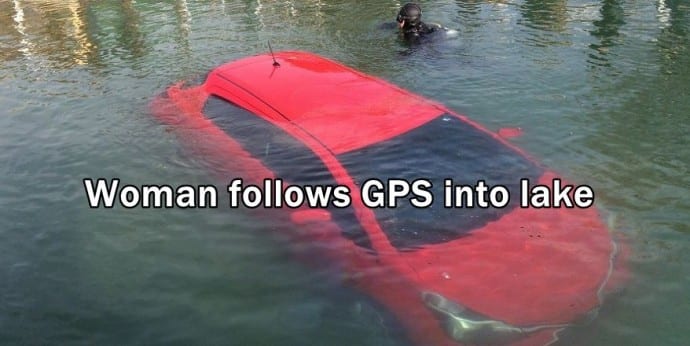 Woman following GPS ends up in a 100-foot-deep lake

According to the Toronto Sun, the woman was following a route on her car’s GPS while driving in the bad night time fog in Ontario when it directed her to drive onto a boat launch at Little Tub Harbor. Since, it was raining and visibility was difficult, she ended up driving straight into Lake Huron as her GPS instructed her to keep going.

Despite the vehicle becoming completely submerged in the icy water, the woman was able to roll down the window, grab her purse, and swim to shore before the car completely sunk, according to the police report. The car has already been removed from the water, and the woman escaped without any injuries and did not even suffer hypothermia from her dip in the four-degree-Celsius water.

“She’s in really good spirits,” Constable Katrina Rubinstein-Gilbert said. “Of course a little embarrassed, but taking it all in stride.”

Rubinstein-Gilbert said alcohol was “absolutely not” a factor in the incident. No charges are pending.

Boats had been kept away from that part of the bay overnight by emergency services, to avoid hitting the car. The red Toyota Yaris was taken out of the water on Friday morning.

“How the launch works, it’s not an airborne thing. It’s not ‘Dukes of Hazzard.’ It kind of goes off the road and the launch just drops all of a sudden,” she said. “So she would have been driving on the road, and then all of a sudden just dropped and hit water.”