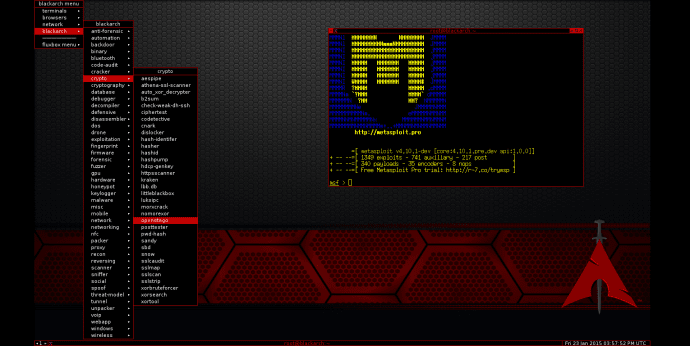 If you are an ethical hacker or a security researcher, this news will undoubtedly interest you. The BlackArch Linux devs have released-the new ISO image of the Arch Linux-based operating system designed for designed specially for hackers and security professionals.

After being in works for several months, the BlackArch version 2016.04.28 was released today as a replacement for the previous ISO image, version 2016.01.10. The new version adds more than 80 new tools that can be used for penetration testing and security auditing operations.

Making the announcement, the devs said in an statement, “Today we released new BlackArch Linux ISOs along with the new installer. The new ISOs include over 1400 tools. We wish to thank all of BlackArch’s users, mirrors, and supporters. Thanks for your help.”

Just like Arch Linux, BlackArch Linux is now powered by Linux kernel 4.5.1, and according to the release notes of the BlackArch 2016.04.28 ISO image, an EFI boot issue has been fixed, along with a well-known 32-bit (i686) boot problem reported by users.

The new version also has a total of 1400 penetration testing tools with the old ones updated and the new ones added, making it a must have download for hackers and security researchers.