Four members of the YouTube prank channel Trollstation have been jailed for staging hoax robberies and kidnappings at City of London Magistrate’s Court. A fifth member of the group was imprisoned in March following a bomb hoax.

The group were involved in London’s National Portrait Gallery robberies on the same day, one of which caused a stampede and left members of the public horrified. They were also involved in a fake kidnapping at Tate Britain in July 2015.

Daniel Jarvis, 27, Helder Gomes, 23, Endrit Ferizolli, 20, and Ebenezer Mensah, 29 were sentenced on Monday at the City of London Magistrate’s Court. 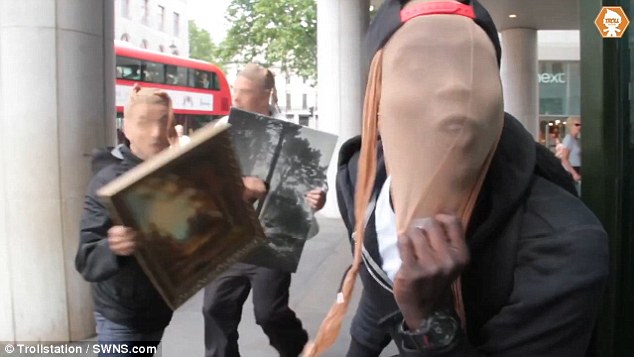 On Monday morning, the members of the London-based collective pleaded guilty to two counts of using threatening words or behaviour contrary to Section 4 of the Section 4 Public Order Act 1986, namely causing fear and provocation of violence.

Mr Jarvis was sentenced to 20 weeks for the charge at the National Portrait Gallery, Mr Mensah and Mr Gomes to 18 weeks each, and Mr Ferizolli to 16 weeks. All four were also sentenced to eight weeks for the fake kidnapping at Tate Britain, to run concurrently.

Trollstation member Danh Van Le was sentenced to 12 weeks imprisonment in March for his involvement in the fake robbery, and also to 24 weeks for a separate bomb hoax.

The channel, with 718,000 subscribers, has built a reputation for filming staged pranks around the city.

“The hoaxes may have seemed harmless to them, but they caused genuine distress to a number of members of the public, who should be able to go about their daily business without being put in fear in this way.

“We hope these convictions send a strong message that unlawful activities such as these will not be tolerated in London,” said Robert Short, of the Crown Prosecution Service.

According to the dramatic CCTV footage released, it shows members of the public escaping in terror from the National Portrait Gallery shortly after 3.30pm on 5 July 2015 when five men burst in with their faces covered and began shouting and screaming.

The men then turned to leave the gallery with framed artwork, giving the impression of a robbery.

“The actions of these five men were outrageous. To go into busy public places wearing masks shouting and screaming at a time of heightened awareness of the terrorism threat facing the UK is deplorable.

The group terrified those visiting the galleries. It is only by pure chance that no one was injured or suffered serious health issues as they fled in what the judge described as a “stampede”. All five men now have a number of weeks in jail to consider just how unfunny their stunts actually were,” said Detective Constable Anthony Parker Met Police.

However, no robbery had taken place. The men had arrived at the gallery with artwork props, which they showed as they made off. They advanced to do the same at the Tate Gallery later that afternoon.

“Our aim was never to get away with breaking the law,” a member of the group known as Light told the BBC at the time.

Light said the group hoped to continue but would “re-evaluate” their approach.

“We are a big influence and we try to use that positively,” he said of the channel’s large following.