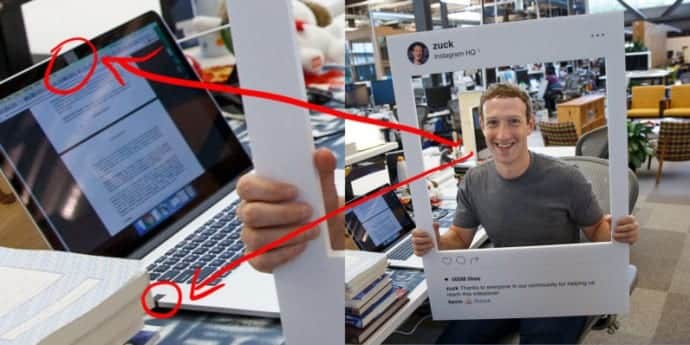 How do you keep yourself safe from the ever increasing hacks, security breaches and spying attempts? Whether you are a layman or a celebrity or the richest person in the world, privacy is of utmost importance to everyone.

And Mark Zuckerberg, billionaire founder and CEO of Facebook is no different. According to a photo posted by the CEO shows that he appears to cover his laptop’s webcam with tape.

On Tuesday, he posted a congratulatory message on the Facebook-owned social media site Instagram to celebrate Instagram’s 500 million monthly user milestone. The picture showed Zuckerberg sitting next to an Apple MacBook.

However, on a closer look of the MacBook, it seemed like Zuckerberg has placed tape over its webcam. On further examination, it appears as if he has taped over the headphone input jack on the left side of the MacBook, as well.

Hackers many a times are known to take control of your computers and secretly listen to your conversations and/or watch you from your laptop’s camera.

It appears as though Zuckerberg, who is worth $35.7billion, is trying to prevent that from happening by placing a piece of tape over his camera, making the webcam useless.

This inadvertent reveal comes just weeks after Zuckerberg’s social media accounts were hacked, one of which reportedly had the not-so-complex password “dadada.”

While it is not known if the laptop is indeed owned by Zuckerberg, given the CEO’s prominence, such a move would be anything but surprising.

In the past too, top names such as FBI director James Comey and NSA whistleblower Edward Snowden have put tape over their webcams to protect their privacy. As Gizmodo points out, it is somewhat ironic that Zuckerberg would be paranoid about people spying on him when Facebook itself makes money by collecting data of over a billion people.