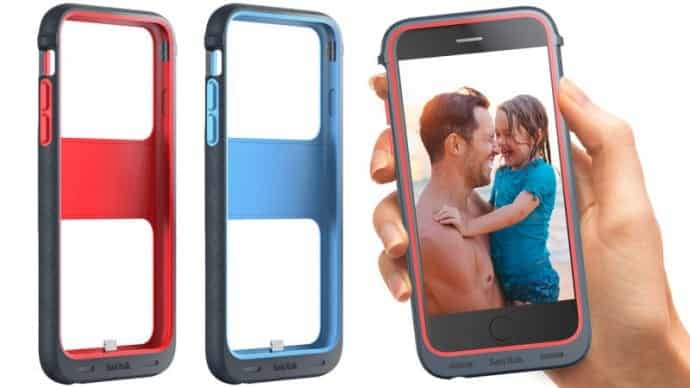 SanDisk, the storage solution company has launched a new sleek iXpand Memory Case that not only gives your iPhone as much as 128GB of extra storage, but also supports an additional battery pack on top. However, the SanDisk iXpand Memory Case is made for iPhone 6 and iPhone 6s users only, and not the larger Plus variants.

It will be available in 32GB, 64GB, and 128GB storage variants. SanDisk’s new case that wraps around the iPhone ensures durable protection for the smartphone while adding to the iPhone’s base storage capacity via the Lightning port. It is worth noting that SanDisk already has a Lightning to USB flash drive for iPhone and iPad devices. The company has also launched a new iOS app for accessing all the stored media.

Working in combination with the free iXpand Memory Case app, users can set their camera roll to automatically back up to the accessory’s storage in order to avoid running into a situation where an excess of photos and videos prevents them from capturing any more media content. The app also password protects any content saved within the Memory Case, and can be transferred to and from SanDisk’s SecureAccess desktop software for Windows and Mac.

“The iXpand Case App is the companion to your iXpand Case allowing you to access and manage your content stored on your case. Get quick access to view your photos and play your, videos, music and access other files, with easy sorting options. The app automatically organizes and arranges all the content into photos, videos, music – so that you do not have to worry about it.

Easily save videos and photos, play videos and music directly from the memory case, create playlists of your favorite music, and manage the optional add-on battery pack. You can even setup automatic transfer of all your photos and videos directly to the case.”

In addition, SanDisk has also introduced an add-on 1900mAh battery pack that just gets attached to the iXpand Memory Case, which the company says can double the life of an iPhone. The pack is automatic and does not need any separate manual to start since it can “detect when your phone’s battery runs low, and kicks in to charge it.” The iXpand Memory Case is available in four colour options namely – Grey, Sky, Mint, and Red.