We have come a long way since first computers and first computer virus was introduced. You may not believe but viruses in those days were so rare that they made headlines unlike today when we have thousands of new malware/viruses released every day.

Those days when DOS was the system of choice, the viruses not only exploited the vulnerability in PCs but were also creative in structure. Sometimes it is good to relive the past and take a look at the viruses which wreaked havoc in 1980s and 1990s. 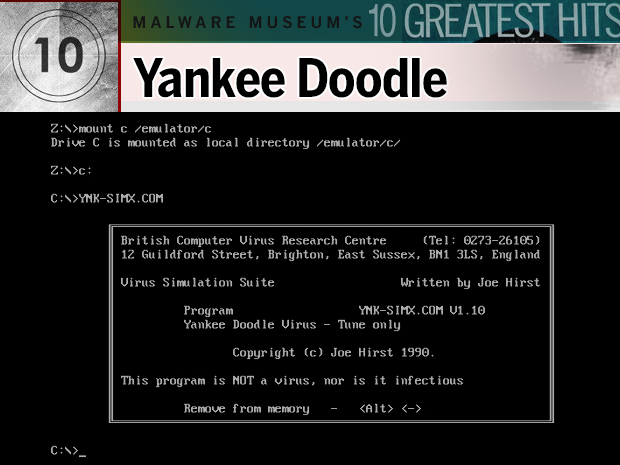 First discovered in 1989 and written by a Bulgarian hacker, this is a memory-resident DOS virus infecting .com and .exe files. It’s best known for the music that gave it its name. Once in memory, it plays — you guessed it — “Yankee Doodle” every day at 4:00 p.m. And that wouldn’t get annoying at all, would it? 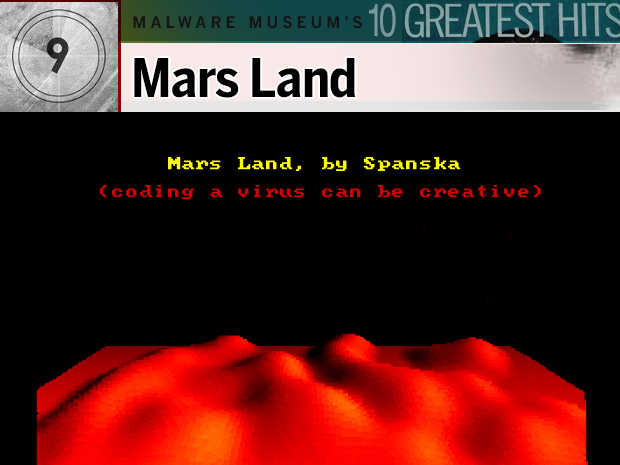 Like I said above, look at the creativity that has gone into making of this virus. What stands out about this MS-DOS virus, which spread in newsgroups in 1997, is the cool, if primitive, topographical map of Mars (hence the name) it appears to create. Mars Land is just one variant of the Spanska virus. 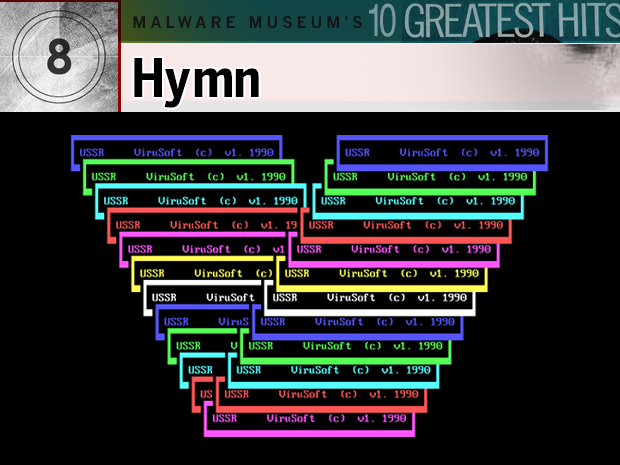 In those days virus was an act of rebellion rather than causing loss to the victim. Most virus writers loved to get those extra giggles from their creations.  This one brought some delayed giggles! Once this DOS-based malware was downloaded, it lurked until the month and date corresponded (April 4, for example, or May 5), and would then trash information in the C: disk boot sector. And then it would add insult to injury by playing the national anthem of what was, in 1990 when Hymn was created, the USSR. Like many early viruses, Hymn had teeth; it could render a victimized PC unbootable without special utilities.

LSD virus was really a nasty piece of work. It was first of its kind to rely on its charm to fool victims. While the victim was enjoying a video accompanying the virus, the non-memory-resident parasitic virus was overwriting all files in their directory. It then displayed the triumphant message, “Coded By Death Dealer 4/29/94.” 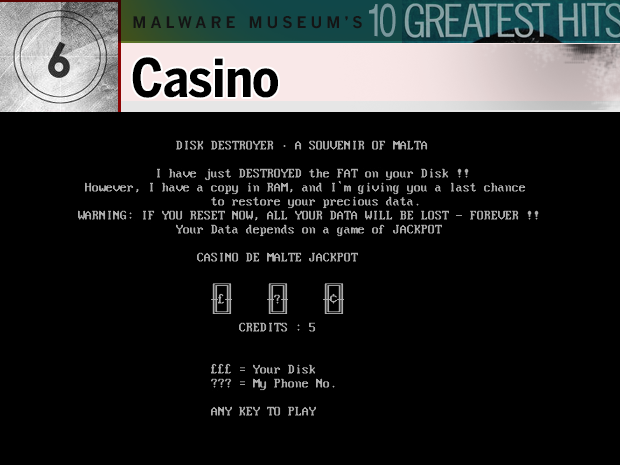 This virus was a precursor to the modern day ransomware though it did not ask for ransom but made victims to play 5 rounds of Jackpot. Victims encountered the message, “I have just DESTROYED the FAT [File Allocation Tables] on your disk!! However, I have a copy in RAM, and I’m giving you a last chance to restore your precious data.” Hapless victims then played five rounds of Jackpot, purportedly to save their files. But whether they won or lost, most variants of Casino shut down their PC, forcing them to reinstall their operating system. 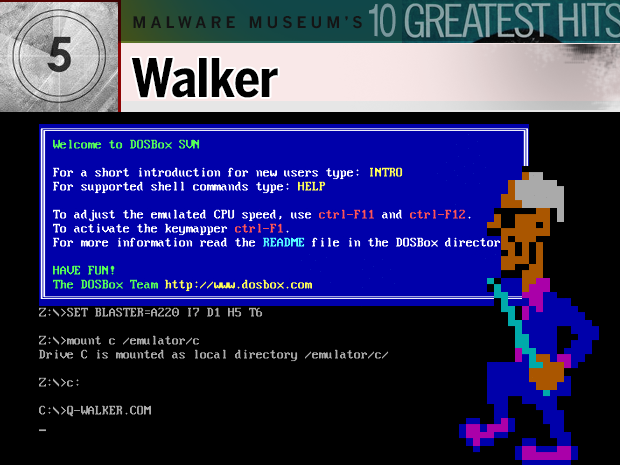 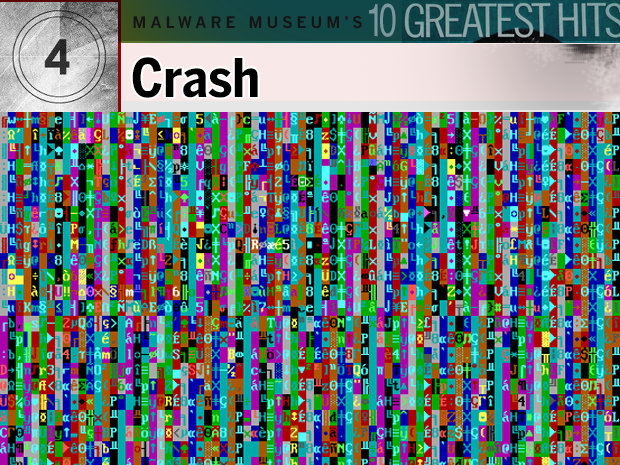 Crash is one of the most secretive virus from 1990s. Very little is know about this DOS virus or its creator other than it corrupted nearly every .com file on infected machines.  Crash fills the screen with test-pattern colors and nonsense characters, flashing alarmingly at the hapless user. You could halt the dance by pressing CTR-ALT-DEL — only to learn that your files had been wiped out. 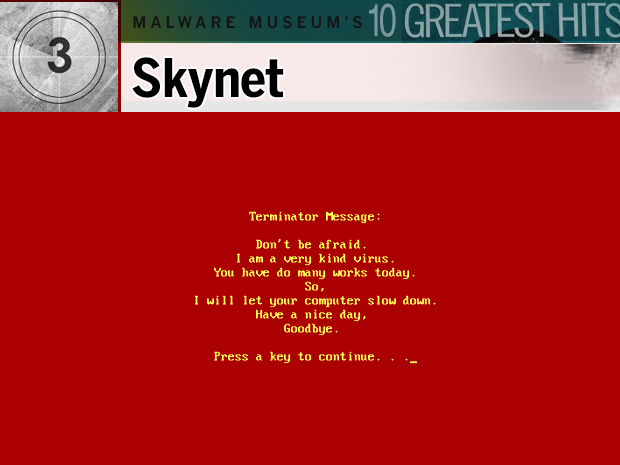 This Arnold Schwarzenegger starrer The Terminator inspired virus was a piece of art in its heydays. It infected all .exe files, slowing the PC dramatically. Soon, the monitor turns red and an odd, ungrammatical message (clearly, English was not the first language of this malware’s author) announces that it’s a “very kind virus.” That it may be — Skynet was not a corruptor of files — but it did slow a lot of computers and annoy a lot of users. 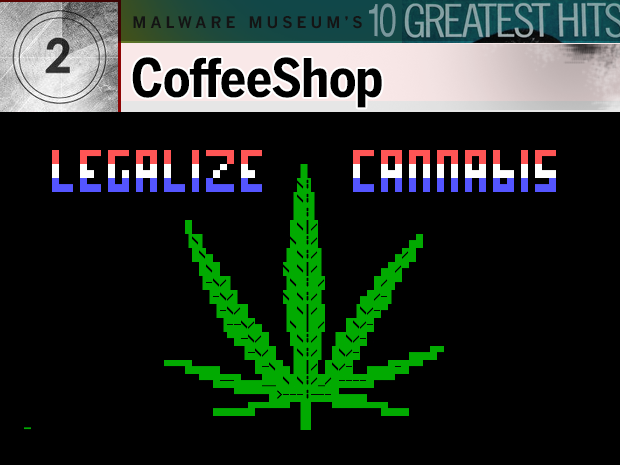 This was one of those protest viruses to legalize cannabis. First discovered in 1992 and thought to originate in Sweden, this DOS virus inserts the text string “CoffeeShop” in infected files. The virus again proves the creativity of the writer as it popped up on victims monitor with a message written in red, white, and blue, and saying “LEGALIZE CANNABIS.”

An example of an MS-DOS-based virus, now removed of its destructive capability but leaving its messages.

These may not be the most destructive virus ever created like the Stuxnet virus but these could easily make the virus writer laugh and the victim give out a wry smile. Many such gems may now be completely hidden since DOS is no longer used but if you know any such virus do mention the same in the comments and we will try to find out about it.