Why Are The Numbers On A Calculator And A Phone Reversed?

We have been using both the phone and the calculator for ages but there is one surprising thing that a few of us may have noticed.

The numbers on the calculator go straight up as the row progresses while it is in reverse order on a phone. If you haven’t yet noticed it, check it now but do you know the reason?

Who is better to answer this question than someone from the field of telecommunications.  Paul Stockley, who works in the telecom sector has the answer that you need.

He says that the reverse order of numbers on a telephone has nothing to do with aesthetics or usage but was continued through the years because of the ‘zero.’

Telephones never had a real ‘zero’.

The ’0? on the rotary telephone dial wasn’t a zero, it was a ten. And it’s in the ‘ten’ position, following ‘nine’.¹ For phones with keypads, it’s still following the ‘nine’, even today.

Designers of newfangled adding machines (and later calculators) re-thought this; they put the 0 in the natural position for their purposes, too; it’s below ’1? both numerically and physically.

Phones stuck with what they already had, and they were obliged to do so or abandon alphabet mapping in its then-current form: ‘A’ appeared on ’2? and ‘Z’ on the ’9? key.

To rearrange the numbers would be to reverse the alphabet—not a brilliant argument, you might say when calculator designers chose to reverse numerical order. 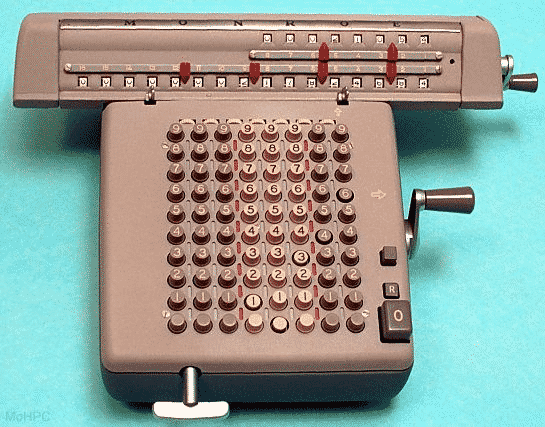 In the days of rotary dials, the pulse signaling system was known as either ‘loop-disconnect’ or ‘decadic’ signaling. Each digit dialed produced a series of quick disconnections in the ‘loop’, the two-wire electrical telephone circuit connecting your receiver set to the exchange (‘central office’, Americans).

Dialing the 1 produced one 66-millisecond break in the loop; the 3 produced three consecutive 66ms breaks; the 8, eight, and the exchanges detected these breaks and stepped the electro-magnetic mechanical switches respectively. Indeed, the whole switching system, officially known as ‘Strowger’ (after its inventor, the world-famous undertaker ²) was also commonly called ‘step-by-step’ or SxS ³.

The quick ones amongst us will have spotted that there is no practical way to create zero line breaks in this system, so dialing the 0 produced ten breaks in the line. And since the number of pulses was created very mechanically, the ten-pulse signal (or ‘zero’ if you wish) necessarily followed the nine-pulse signal on the dial. Technically-speaking, there never was a 0 in telephone-land.

It wasn’t even a design decision, it was dictated by mechanics and later entrenched by the overlay of the alphabet.

And that, grasshopper, is why we still have the telephone ’0? in the ‘ten’ space.

¹ Yes, I know that New Zealand and Sweden had their rotary telephone dials all wrong. But most people don’t, and I’m trying to write intelligible answers for everyone.

³ Yes; the signaling system really did have five names:

‘Clicky-clicky’ is not a recognized name.

More perplexing to me is why adding machine (and later calculator) manufacturers—the newcomers—chose to put the ’7? in the top-left position, which seems to me like the natural place for the ’1? for a person who writes left-to-right, top-to-bottom?

Conflicting patents, maybe? Yet I presume adding machines were invented before the push-button dial. Some mechanical reason to do with the complex machinery packed into an adding machine?

Hope you have found the answer why the numbers climb up in a phone dial and go in reverse on a calculator. Hope some telephone manufacturing company rethinks the folly and start building new phones with numbers climbing up.