A link to a website designed by hacker, crashes your Chrome, Microsoft Edge, and Mozilla Firefox and makes calls to 911 if opened from a smartphone

A harmless looking link circulating on Twitter is causing mayhem in the United States. The link is from a website, meetdesai.com (caution do not click) and has been shortened using Google’s link shortening service.

Clicking on this link on Chrome desktop version makes Chrome open up multiple tabs and hang while opening it opening it on Microsoft Edge and Mozilla Firefox make them try to open Chrome tabs while these also browsers hang. The Firefox browser pops up LOLOLOLOL message before hanging up. The link also causes multiple instances of File Picker UI Host to run in Windows 10. 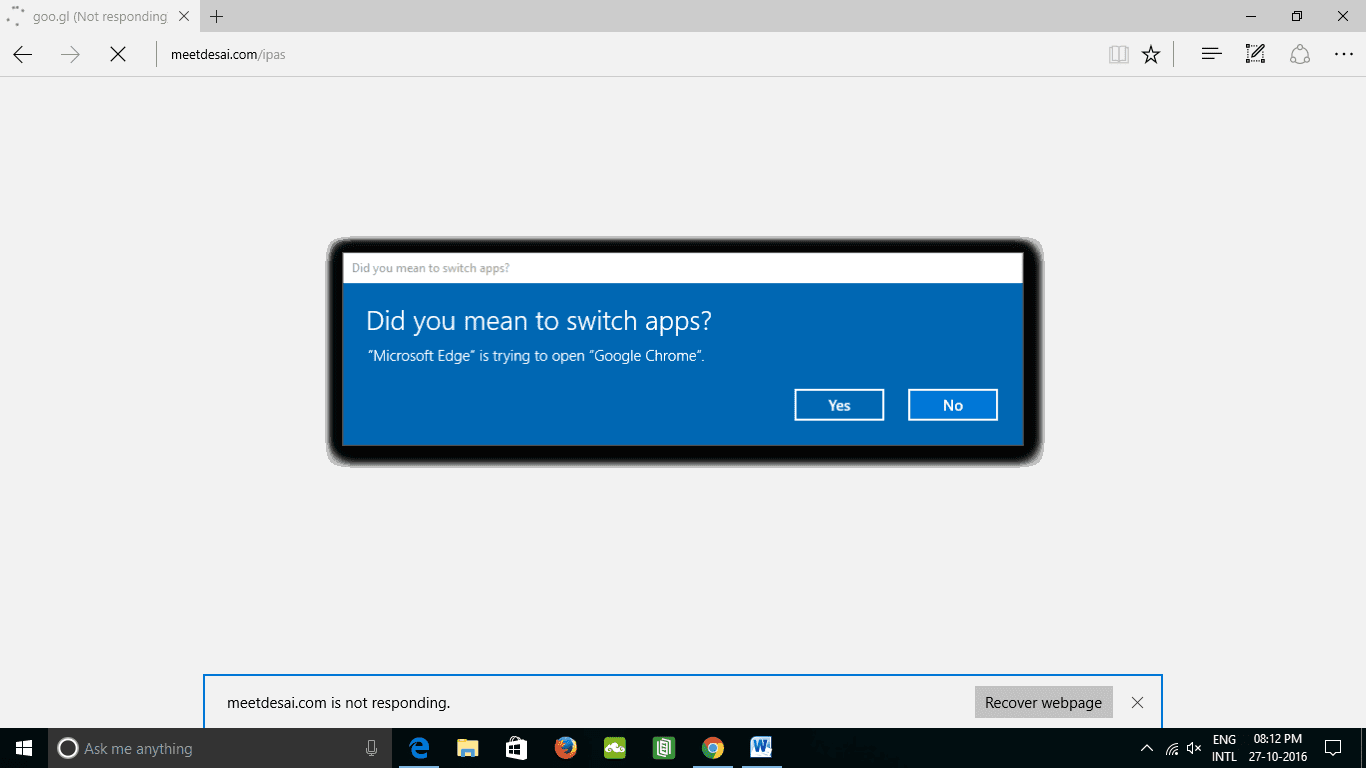 According to reports, the link has been circulating on Twitter and clicking it on your smartphones causes the Twitter App/browser to crash while the link makes incessant calls to 911. Victims like Andrea Jara said that once she opened up the link online, her phone began to call 911 over and over without touching the keypad.

This hack has gone viral and is being used on Twitter. According to victims, no matter how many times they tried to hang up on the phone call, the phone would not stop dialing 911.

#911 operators in #ThurstonCounty say they were flooded with 30-50 non-emergency calls because of a twitter hoax yesterday. #KomoNews pic.twitter.com/KNYnfApho0

The 18-year-old hacker who made this prank link has been arrested by Lacey Police Department. The name of the hacker has been kept anonymous while the police are investigating the matter further.

Jara, a Fort Lauderdale resident and vlogger on YouTube said she likes to help and motivate teens on her YouTube channel. On Tuesday night, she posted a motivational tweet and that’s when a follower tweeted her back with a link.

“It kind of just looked like a YouTube video, so I clicked on it,” Jara said. “It took a little bit, and it kind of just glitched. My phone just went blank, and it just started calling 911. I’m sitting there, and I’m clicking end, and it wouldn’t stop.”

The hack took over her phone, calling 911 multiple times. “It physically just looked like it was 911 calling,” Jara said. “It was just a black screen, and it said 911, and every single time you click end, it was like recalling, calling, calling, so there was no way to stop it.”

Clicking on the link on a smartphone makes it dial 911 non-stop in the United States but it is not known what effect it will have if clicked from the outside US. If you receive any link from goo.gl and don’t trust the sender, please don’t click on it or retweet/forward it to your friends. Not only will y our smartphone/laptop hang but it may also rack up your data bill.