OnePlus’ next flagship OnePlus 3T aka OnePlus Pixel to come with Snapdragon 820, 6GB RAM and Android 7.0 Nougat, to be launched on 15th November

OnePlus has been rather busy releasing the Android 7.0 Nougat for its flagship OnePlus 3. But on the other hand, it is also readying for its mega launch of next flagship smartphone called OnePlus 3T which will be unveiled on 15th November ahead of the busy holiday season.

A leak from the benchmarking website, Geekbench shows that OnePlus is readying a new smartphone for launch. The smartphone being benchmarked has an intriguing name, OnePlus Pixel, which suggests the Chinese handset maker plans to offer a raw Android experience with the next smartphone. The OnePlus Pixel leaked on Geekbench is powered by Android 7.1 Nougat,  a quad-core Qualcomm Snapdragon 820 processor inside and 6GB of RAM. 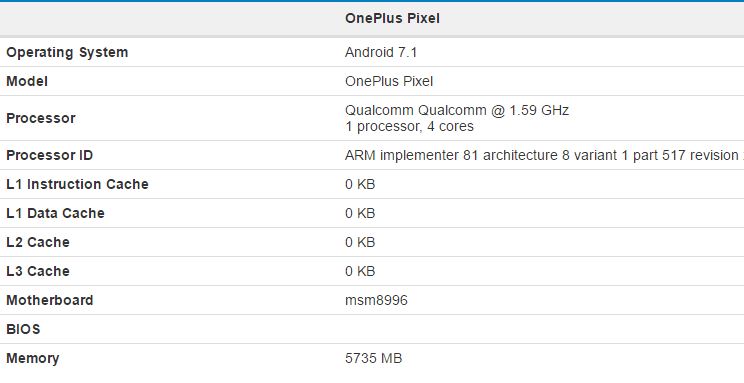 Though the leak shows a device called OnePlus Pixel, the Chinese handset maker is known to work only on one smartphone at a time unlike other manufacturers so it can be safely assumed that the OnePlus Pixel is OnePlus 3T, which is the Chinese brand’s next flagship.

The Chinese smartphone maker is known to keep its OnePlus community happy by delivering the latest updates at the fast clip unlike other manufacturers. As mentioned earlier, OnePlus 3 to be the first smartphone from the Chinese company to receive Nougat.

It remains to be seen whether or not the launch of the OnePlus 3T next week will convince many OnePlus 3 owners that it’s worth the upgrade.