As we have said earlier, OnePlus is one smartphone manufacturer with its ear to the ground. Not only it is quick in pushing important updates and patches to OnePlus users (even old OnePlus One ones), the Chinese smartphone maker also innovates its OnePlus devices to bring latest components to its buyers.

We have already talked about the upcoming OnePlus 3T aka OnePlus Pixel which will be released tomorrow and will bring Android 7.0 Nougat out of the box to the buyers. Some of our readers explained that OnePlus Pixel is OnePlus 3 with Google Assistant aboard it but the exact fate and features of OnePlus 3T will be known tomorrow.

Now OnePlus is gearing up to bring 1440p display in its upcoming OnePlus 4 Android smartphone. The company is reportedly preparing a massive OnePlus 4 for release in the first half of 2017.

Although it is still fairly early, it looks like the next OnePlus handset could be fully made of glass construction.  Also, the new handset could be the first to offer a display better than 1080p and feature a 5.3-inch 1440p AMOLED.

With outside specs like these, you can expect OnePlus 4 to be fired by Snapdragon 830 / 835, 6GB (8GB possible) RAM, 128GB of internal storage, and a huge 4000mAh battery. OnePlus may follow Apple’s iPhone 7 and bring dual camera setup to OnePlus 4 at the rear with AR/MR. Here AR means Augmented reality and MR means Mixed Reality. 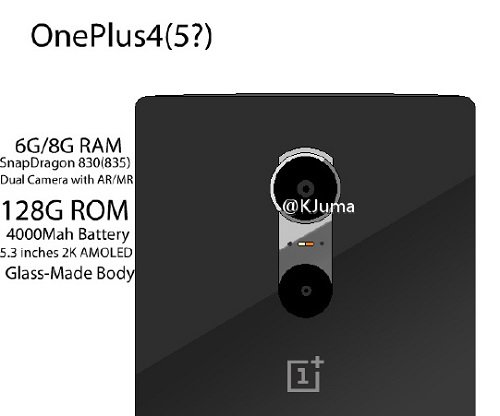 When can we expect OnePlus 4?

OnePlus generally releases its smartphones in the first half of the year to get the first mover advantage. So when can we expect OnePlus 4. Looking at the fact that OnePlus One launched in April 2014, the OnePlus 2 in July 2015 and the OnePlus 3 in June 2016, it is difficult to predict the exact month but most likely the OnePlus 4 will be released in May 2017. This gives clear headroom for OnePlus to take on the competition from the other big smartphone releases like Samsung Galaxy S8, HTC 11 and LG G6. Imagine a OnePlus 4 packed with all the above features plus the world’s first 1440p AMOLED screen, this should take the wind out of the competition.

Though the above are rumors circulating on the popular Chinese micro-blogging Twitter equivalent, Weibo, we would not brush this off as rumours knowning the OnePlus’ penchant of coming with a flagship killer every year.