It is a known fact that Microsoft has left no stone unturned to aggressively push its users to adopt the new operating system, Windows 10 since the time it was launched in July 2015. In the process, it has received many backlashes from its users for forcibly upgrading their older versions of Windows 7/8/8.1 to Windows 10 and installing updates.

Last year too, Microsoft managed to grab headlines when it announced that Windows 7 and Windows 8.1 would continue to receive updates through January 14, 2020 and January 10, 2023 respectively, as the company is offering to help enterprises in the transition to Windows 10.

It also announced that it had created a list of specific new Skylake devices that it would support to run Windows 7 and Windows 8.1 through July 17, 2017. In other words, any new chips running on older versions of Windows, including 7 and 8.1, along with the Intel’s sixth-generation Skylake chips and its successors would no longer receive support from Microsoft. This meant that all customers buying PCs based on Intel Skylake (and newer) would have to move to Windows 10 if they expected to have a great experience.

This move by Microsoft attracted a lot of criticism forcing the Redmond giant to extend its support for Skylake for a year, and thereafter offer to continue its support to the platform as it would for previous generations. However, the fate of Intel’s Kaby Lake and AMD’s Ryzen processors after the announcement made by Microsoft was always under the hammer.

Microsoft has now gone on to officially announce that devices running Windows 7 or Windows 8.1 and equipped with Intel or AMD’s latest processors, would not be receiving the latest Windows updates henceforth. According to Microsoft, the new processors are “designed for the latest version of Windows” and that compatibility on the older Windows platforms is difficult.

The new limitations have already started affecting some users this month, Ars Technica reports. This Windows update block has affected CPUs such as Intel 7th Generation “Kaby Lake”, Intel 6th Generation “Skylake” (and newer), AMD Ryzen, AMD “Bristol Ridge”, and Qualcomm “8996” (Snapdragon).
The following prompt will show up for users when attempting to update their OS: 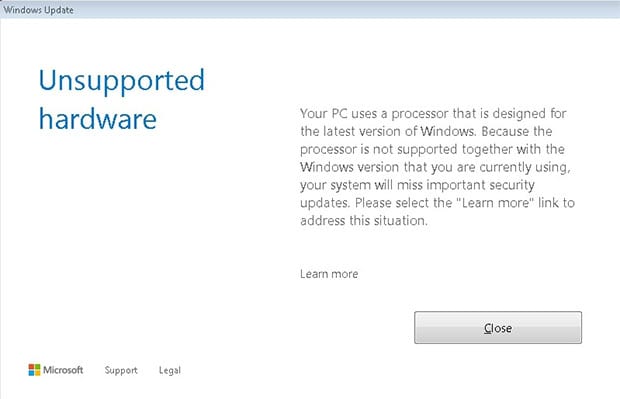 One thing is clear that Microsoft is taking all these measures to ensure that it focuses all its efforts on the current OS, Windows 10 rather than keep on supporting nearly deplored ones, which makes sense. However, what would have been more sensible from Microsoft would be to allow time for its users of older OS to migrate to the new OS rather than imposing the new policy.