What kind of programming skills do you need to survive in the extremely ever growing competent market always remains the burning question?

IEEE Spectrum research group, a publication of The Institute of Electrical and Electronics Engineers, a technical advocacy organization, has the answer for you. According to their 2017 IEEE Spectrum ranking published recently, Python claimed the top spot as it was the highly desirable coding skill by recruiting companies. It was followed closely by C, Java, and C++.

The ranking was created by the Institution of Electrical and Electronics Engineers by weighting and combining 12 metrics from 10 sources. The data chosen was based on developing languages, what companies are looking for, job postings and what’s most popular in open source. The data were collected from Google Search, Twitter, GitHub, Reddit, Hacker News, Google Trends, Stack Overflow, CareerBuilder, Dice, and its own digital library. The data was further filtered based on their usage via the enterprise/desktop, web, mobile, or embedded environments to obtain the most interesting set of languages.

According to the research group, Python that held the third place in the world’s most popular language ranking list in 2016 jumped two spots this year to take the first place, with C, Java, and C++ taking second, third and fourth places respectively. Making its way to the fifth spot was C#, which was replaced by R last year. 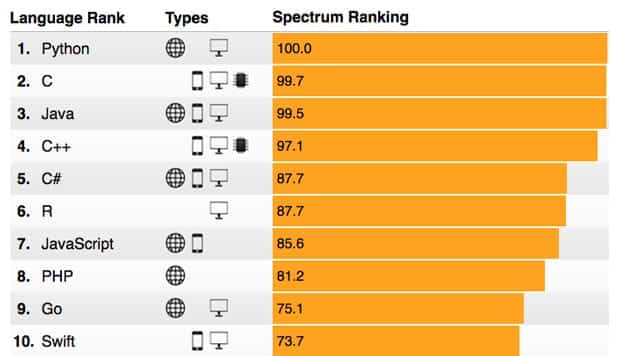 Coming in at the ninth place in the ranking is Go (or GOLANG), a new upstart language spearheaded by a team at Google. The free and open-source project has an excellent standard library and it compiles fast. It’s also great with concurrent tasks as well as programs. It can also be used to develop for the desktop, mobile and web. Also, making it to this year’s top 10 is Apple’s Swift, which is quite remarkable considering that it only debuted on the rankings a couple of years ago.

IEEE’s programming language rankings have not seen any new languages entered the rankings for two years in a row now. “We seem to have entered a period of consolidation in coding as programmers digest the tools created to cater to the explosion of cloud, mobile, and big data applications”, stated the Institution in their recent report.

You can click here to get a comprehensive look at the top 48 programming languages.