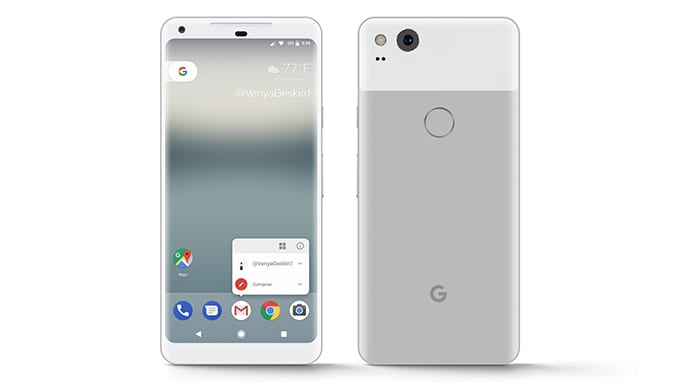 While Google is gearing up to launch its next-generation of Pixel devices at an event on October 4, Droid Life, a long-running Android news site, in the meantime, has managed to get hold of some images, storage variants, color options and prices of the upcoming smartphones, Pixel 2 and Pixel 2 XL.

To begin with, the newly leaked renders of Pixel 2 reveal that the HTC-manufactured device will reportedly have a 5-inch screen display and prominent bezels on the sides. The smartphone will be powered by Qualcomm’s Snapdragon 835 processor and come in 64GB and 128GB storage options, priced at $649 and $749, respectively. The Pixel 2 smartphone is expected to offer a squeezable frame just like the HTC U11. Pixel 2 will be available in “Just Black”, “Clearly White” and “Kinda Blue” color options. Google is reportedly expected to offer financing offers on these devices over the course of two years.

On the other hand, LG made Pixel 2 XL is expected to feature a 6-inch OLED display and Qualcomm’s Snapdragon 835 processor. It will be available with 64GB and 128GB storage capacities, priced at $849 and $949 respectively. Further, the device will be available in two color variants – one with a combination of black and white back cover and another with an all-black cover. Google is offering financing options on 64GB and 128GB Pixel 2 XL devices so that the investment can be spread over a period of 24 months.

Further, both the smartphones are expected to have the same 12MP rear camera as seen in the original Pixel devices and better batteries than its rivals.

We advise you to take the above leaked information with a pinch of salt and wait for the official announcement from Google on October 4. In the meantime, keep watching this space for more updates and leaks on the devices.