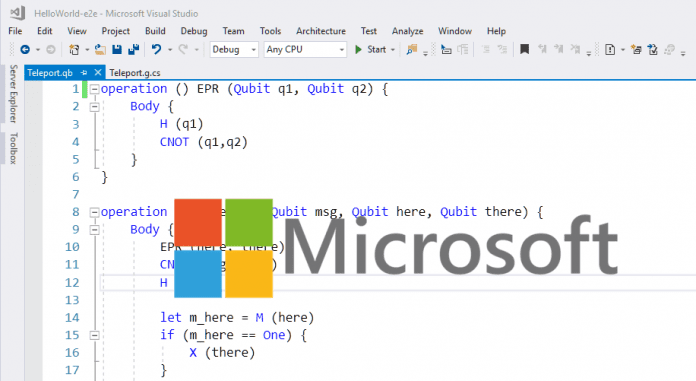 Microsoft has been working on to build a robust ecosystem for quantum computing for quite some time now. In its recent Ignite 2017 tech conference in Orlando, Florida, Microsoft chief executive Satya Nadella said the company will be releasing a new programming language for quantum computers, along with full Visual Studio integration and a quantum computing simulator, later this year.

“Through quantum computing, we can unlock solutions to problems in areas such as artificial intelligence, clean energy, global warming, materials design and much more. At Microsoft, we’re on the cusp of empowering a quantum revolution with our unique, topological approach,” Mr Nadella said.

“At Microsoft we are taking a ‘full stack approach’, including programming and controlling the quantum computer at scale. And we want to empower developers and engineers around the world to develop these types of solutions.

In order to explain the difference between quantum computers and the current state of the art, Nadella used the corn maze. If a classical computer were to try to figure out the maze, Nadella explained, it would start down a path, hit a wall, back track, start again, hit a wall, and back track again until it finished all its options. No doubt, the answer would be found but it could take a lot of time.

“A quantum computer that enables you to encode information—not just a one or a zero but a one and a zero together unlocks massive parallelism,” he said. “It could take every path in the maze simultaneously. That’s the power of quantum.”

“The system, which will be available as a free preview by the end of the year, also includes libraries and tutorials so developers can familiarize themselves with quantum computing. It’s designed to work at a higher level of abstraction, so that developers without quantum expertise can actually call quantum subroutines, or write sequences of programming instructions, working up to writing a complete quantum program,” said Microsoft.

Microsoft is also going to release two versions of a quantum simulator. While one version will run locally, the other version will be powered by Azure. The local version of the stimulator will offer up to 32 qubits and will require 32GB of RAM. Each additional qubit doubles the amount of memory required. The Azure version will scale up to 40 qubits.

Quantum computing is seen as the next big cutting edge in computing, as it will attack problems of global warming and diseases. It could solve different kinds of problems, for instance, extremely complicated problems involved with energy or healthcare, in mere hours or days, which with today’s technology would take many lifetimes. It is also expected to significantly speed up the time it takes to process an AI training algorithm.

While we are still a far way into the future, developers who are interested in participating in Microsoft’s quantum language and quantum simulator preview can sign up here.