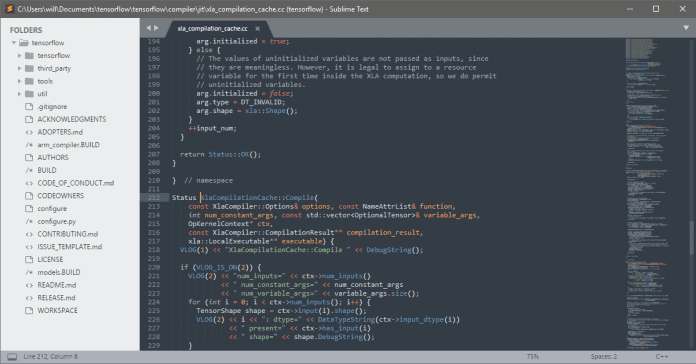 There is some good news for lovers of the popular code editor, Sublime Text, as it has released the new final version of Sublime Text 3.0 Build 3143, which is now available for download on Windows, Linux and MacOS. In comparison to the previous release, the program is supposed to be better in every way, which makes it easy for everyday people to work with code.

For those unaware, Sublime Text is a proprietary cross-platform source code editor with a Python application programming interface (API). It natively supports many programming languages and markup languages, and its functionality can be extended by users with plugins, typically community-built and maintained under free-software licenses. Sublime Text is available for Mac OS, Windows and Linux.

There are a lot of changes in Build 3143 that practically affect every aspect of the application, such as appearance, functionality and performance. For instance, Sublime Text 3.0 will now consume much less resources and run much faster than version 2 in every aspect, such as launching a program, opening files, swapping words into a document, or scrolling through content. The new Sublime Text also has some interesting visual changes, which can be seen in the form of new icons, interface color scheme, adaptive theme and publisher fonts. In addition, compared to the last beta, 3.0 brings a completely new UI theme, a new syntax highlighting engine, Touch Bar for MacOS, touch input for Windows.

Sublime Text 3.0 also includes better spell check, more efficient automatic indentation, GoTo Definition, and better customization of the interface to high resolution screens. Further, in order to make Sublime Text 3.0 one of the best programming IDEs for both amateurs and professionals alike, a number of problems and bugs have also been fixed.

You can check the complete list of changes of Sublime Text 3.0 by clicking here.