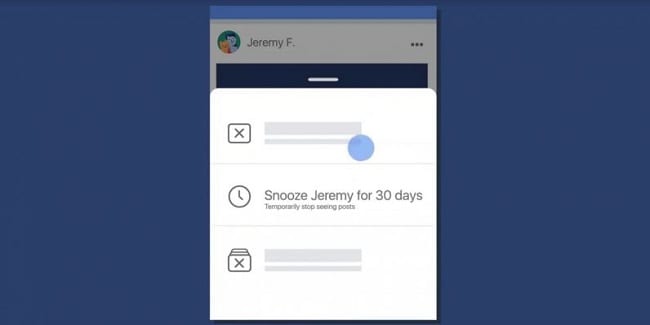 Back in September, Facebook had said that it was testing the “snooze” feature among a small section that allows users to mute a person, page or group for a certain amount of time, anything from 24 hours to 30 days without permanently unfriending or unfollowing them. The concerned people won’t be notified that the user has hit the “Snooze” button on them either, and they won’t be taken off the user’s friends list.

“Seeing too many photos of your uncle’s new cat? Is your friend tempting you with endless photos of ramen on her Japan trip? It turns out, you’re not alone,” Shruthi Muraleedharan, Facebook product manager said in an announcement blog post.

“With Snooze, you don’t have to unfollow or unfriend permanently, rather just stop seeing someone’s posts for a short period of time. The people, Pages, and groups you snooze will not be notified. You will be notified before the Snooze period is about to end and the setting can also be reversed at any time,” Shruthi added.

“With features like Unfollow, Hide, Report and See First, we’ve consistently worked toward helping people tailor their News Feed experience, so the time they spend on Facebook is time well spent,” the firm claims. “As News Feed evolves, we’ll continue to provide easy-to-use tools to give you the most personalized experience possible every time you visit Facebook.”

Basically, the snooze feature is to give people control over their News Feed so they can stay connected with the stories they find most relevant.

The announcement of the feature comes after a number of former employees and investors criticized the social media site in public, including former executive Chamath Palihapitiya, who during a November interview at Stanford University, stated that: “I think we have created tools that are ripping apart the social fabric of how society works. The short-term dopamine-driven feedback loops that we have created are destroying how society works and eroding the core foundations of how people behave by and between each other.” However, he later retracted the statement.

Sean Parker, who was an early investor in the company, said it was “exploiting a vulnerability in human psychology” and concerned about Facebook’s influence on relationships, productivity and children’s brains.

To access the snooze feature, you need to click on the three horizontal dots to the right of the name of whatever friend / page / group, you want to mute. It comes along with the unfollow option.