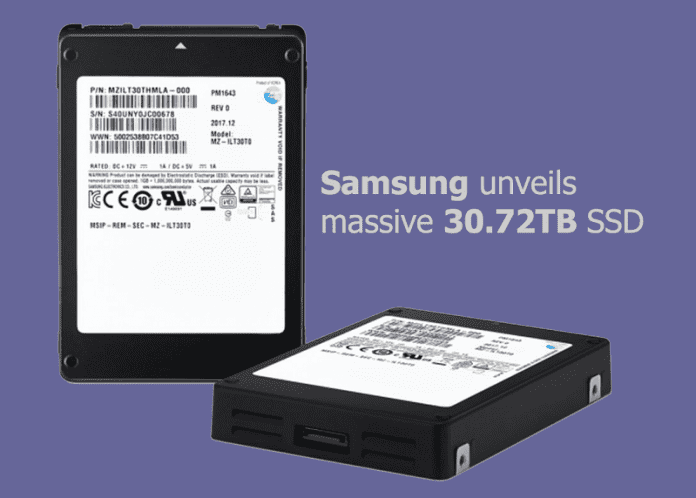 The 30.72TB SSD, dubbed the PM1643, is double the capacity of Samsung’s current 15.36TB SSD that it unveiled in March 2016. Not intended for consumer use, the new SSD is designed to meet the growing storage needs in a host of market segments, including the government, health and education markets, and others.

“With our launch of the 30.72TB SSD, we are once again shattering the enterprise storage capacity barrier, and in the process, opening up new horizons for ultra-high capacity storage systems worldwide,” said Jaesoo Han, Executive Vice President, Memory Sales & Marketing Team at Samsung Electronics. “Samsung will continue to move aggressively in meeting the shifting demand toward SSDs over 10TB and at the same time, accelerating adoption of our trail-blazing storage solutions in a new age of enterprise systems.”

Samsung claims the product is “the industry’s largest solid state drive (SSD)”. To make the breakthrough possible, Samsung used its V-NAND technology and 64-layer 3-bit 512-gigabit (Gb) chips. It combined 16 stacked layers of 512GB V-NAND chips into 1TB into “super-dense” 1TB packages, of which 32 were then combined into each 2.5-inch SSD form factor. This allows around 5,700 (5GB, Full HD) movie files and countless files to be stored on a single drive.

The new PM1643 SSD is based on a 12Gbps Serial Attached SCSI (SAS) interface. The PM1643 sports random read and write speeds of up to 400,000 IOPS and 50,000 IOPS, and delivers sequential read and write speeds of up to 2,100MB/s and 1,700 MB/s, respectively. These are basically four times the random-read performance and three times the sequential-read performance of a typical 2.5-inch SATA SSD, Samsung said.

Samsung said it achieved the new capacity and performance improvements through several technology progressions in the design of its controller, DRAM packaging and associated software. These advancements include a highly efficient controller architecture that integrates nine controllers from the previous high-capacity SSD lineup into a single package, enabling a greater amount of space within the SSD to be used for storage. The PM1643 drive also applies Through Silicon Via (TSV) technology to interconnect 8Gb DDR4 chips, creating 10 4GB TSV DRAM packages, totaling 40GB of DRAM. This marks the first time that TSV-applied DRAM has been used in an SSD, Samsung added.

The new SSD comes with a five-year warranty, rated for one full drive write per day (DWPD). This means you can replace 30.72TB of data every day continuously for five years without expecting a catastrophic drive failure. The PM1643 also offers a mean time between failures (MTBF) of two million hours.

Samsung started manufacturing the new 30TB SSD in January and has plans of expanding the lineup later this year – with 15.36TB, 7.68TB, 3.84TB, 1.92TB, 960GB and 800GB versions. No information on the pricing has been announced yet.