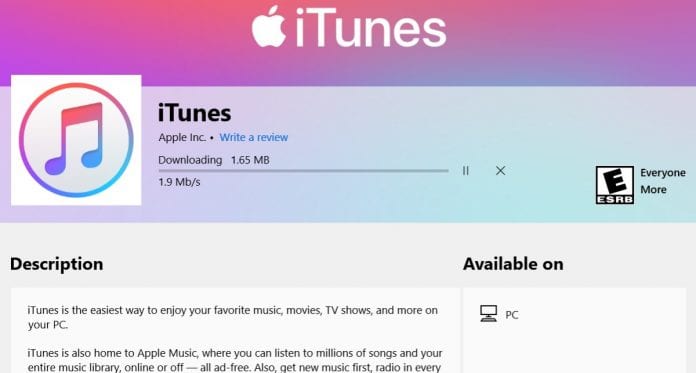 After a year-long wait, Apple iTunes finally arrives at the Microsoft app store

Finally, the wait is over, as Apple iTunes can now be downloaded from the Microsoft Store (formerly known as Windows Store) for Windows 10. Microsoft had last year announced at its Build 2017 developer conference that it would be bringing iTunes to the Microsoft Store before the end of 2017. However, in December 2017, Apple said that iTunes will not be available in the Microsoft Store that year, as the company needed “a little more time” to deliver the “full iTunes experience” to customers.

“Now you can download iTunes from Microsoft Store and easily play your favorite music, movies, and more — right from your Windows 10 PC. iTunes is also home to Apple Music, where you can listen ad-free to over 45 million songs and download your favorites to enjoy without using WiFi. iTunes is free to download, and you can try Apple Music free for three months. There’s no commitment, and you can cancel anytime,” says Microsoft in its blogpost.

In order to download the iTunes app, the computer should be running Windows 10 version 1709 and build 16299, or later. The download size of the file is 476.7MB and is compatible with both x86 and x64 PCs. It is also worth noting that installation of the latest version of iTunes will automatically replace the previous version that you are using on your PC. So, it is recommended that you back up your data before installing the latest version.