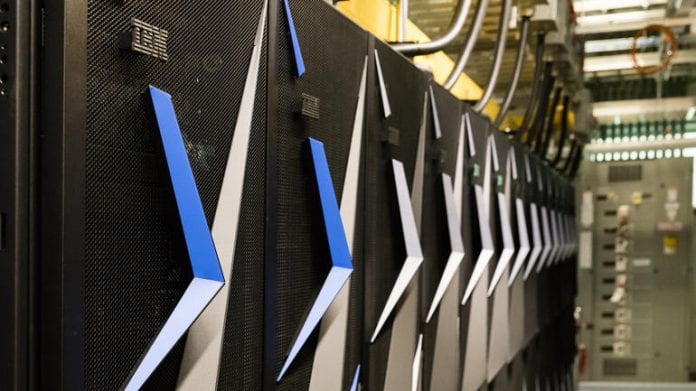 “We know we’re in competition, and it matters who gets there first,” Secretary of Energy Rick Perry told several hundred people at the Friday afternoon ceremony at Oak Ridge National Laboratory (ORNL), a U.S. Department of Energy laboratory. “We reached a pinnacle today.”

The new supercomputer, dubbed Summit has been developed by IBM (International Business Machines) Corp. with the help of  Nvidia Corp., for the U.S. Department of Energy’s ORNL in Tennessee.

Summit can perform 200 quadrillion floating-point operations per second (FLOPS), making it the “most powerful and smartest scientific supercomputer,” said Dave Turek, vice president of high-performance computing and cognitive systems at IBM. It is 60 percent faster than China’s Sunway TaihuLight and almost eight times more powerful than the supercomputer called Titan, which was the lab’s previous top performer.

The Summit supercomputer has a staggering 9,216 core-22 IBM Power9 CPUs as its compute base. Further, the CPUs are enhanced by 27,648 Volta Tensor Core GPUs, providing even more computational power. It weighs nearly as much as a commercial jetliner and is connected by 185 miles of fiber optic cables.

It takes 4,000 gallons of water a minute to cool the system and Summit uses enough power to run 8,100 homes. Also, the interconnect is fast with 25 gigabits per second of interconnect between nodes, that are powered by Mellanox’s Infiniband. The system is attached to 250 petabytes of storage. The operating system running on top of all that power is Red Hat Enterprise Linux (RHEL).

Summit is meant to be used for machine learning and deep learning applications. Nvidia CEO Jensen Huang described Summit as the world’s largest AI (artificial intelligence) supercomputer, a machine that learns. “Its software will write software, amazing software that no human can write,” Jenson said.

“I am truly excited by the potential of Summit, as it moves the nation one step closer to the goal of delivering an exascale supercomputing system by 2021,” Perry added. “Summit will empower scientists to address a wide range of new challenges, accelerate discovery, spur innovation, and above all, benefit the American people.”

It would be interesting to see how long can the U.S. maintain its top position in the supercomputing race!