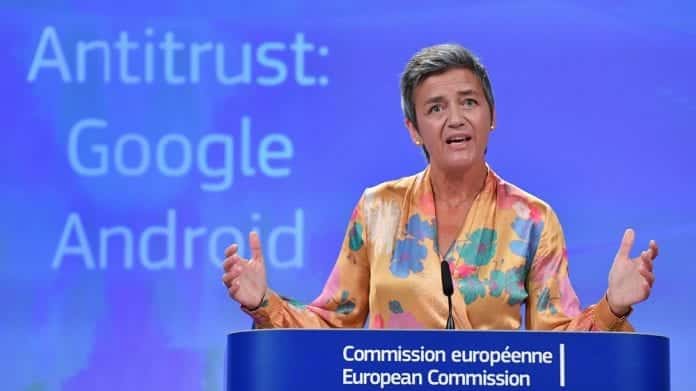 Google fined $5 billion fine for illegal restrictions on Android use

The European Union Commission on Wednesday imposed on Google a record $5 billion (4.34 billion euros) fine for illegally abusing the dominance of its Android operating system.

Margrethe Vestager, EU Antitrust Chief who is in charge of the competition policy, said that the U.S. tech giant has been unlawfully using Android’s near-monopoly since 2011 to improve usage of its own search engine and browser and to strengthen its dominant position in general Internet search.

“Today the commission has decided to fine Google 4.34 billion euros (USD 5 billion) for breaching EU antitrust rules,” Vestager told a press conference in Brussels. “Google has used Android as a vehicle to cement the dominance of its search engine. These practices have denied rivals the chance to innovate and compete on the merits. They have denied European consumers the benefits of effective competition in the important mobile sphere.”

Vestager said Google “must put an effective end to this conduct within 90 days or face penalty payments” of up to five percent of the worldwide average daily revenue of its parent company, Alphabet.

“Our case is about three types of restrictions that Google has imposed on Android device manufacturers and network operators to ensure that traffic on Android devices goes to the Google search engine,” said Vestager.

Fine of €4,34 bn to @Google for 3 types of illegal restrictions on the use of Android. In this way it has cemented the dominance of its search engine. Denying rivals a chance to innovate and compete on the merits. It’s illegal under EU antitrust rules. @Google now has to stop it

The search giant ultimately gave “financial incentives” to manufacturers and mobile network operators, if they exclusively pre-installed the Google Search app on their devices, the commission said.

Google said it would be appealing against the fine imposed by EU. “Android has created more choice for everyone, not less. A vibrant ecosystem, rapid innovation, and lower prices are classic hallmarks of robust competition. We will appeal the Commission’s decision,” a Google spokesperson said in a statement.

This statement was backed by Google’s CEO Sundar Pichai on Twitter, who said that Android’s existence has led to robust competition in a blog post on the subject.

It would be interesting to see how does the EU’s decision affect Google’s advertising business, as well as mobile phone manufacturers and app developers.