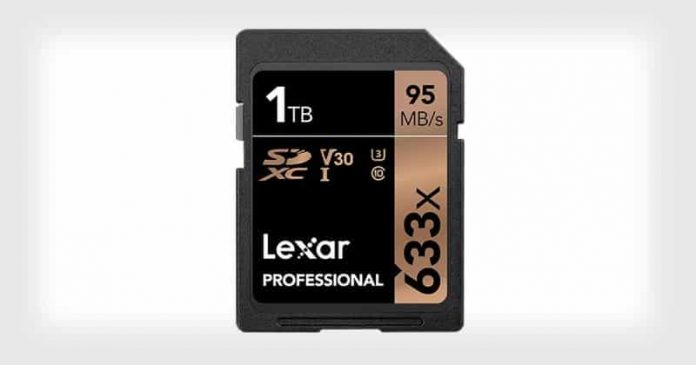 Recently in CES 2019, Lexar unveiled The Professional 633x SDXC UHS-I ( a memory card with the capacity to store 1 terabyte of photos and videos ).

It was created to store more than 500 hours of video and probably millions of photos.

But, if you can recall, then a few years back SanDisk also demonstrated their first 1TB SD card prototype which never made to Market. This makes the Lexar the first company in the world to launch 1 TB of SD card storage.

Specially designed for midrange DSLRs, HD camcorders, and 3D cameras, Lexar’s new card allows shutterbugs to capture a full-HD 1080p video along with 3D and 4K video recording, with transfer speeds up to 95MB per second.

This will act as a great convenience for consumers who demanded greater storage for their cameras.

The combination of 1TB of storage with a high-performance SD card is expected to cater the need and demands of content creators, who shoot large volumes of high-resolution images and 4K videos.

You can order it from their official website Lexar.com.

For more such stories, stay tuned with us.