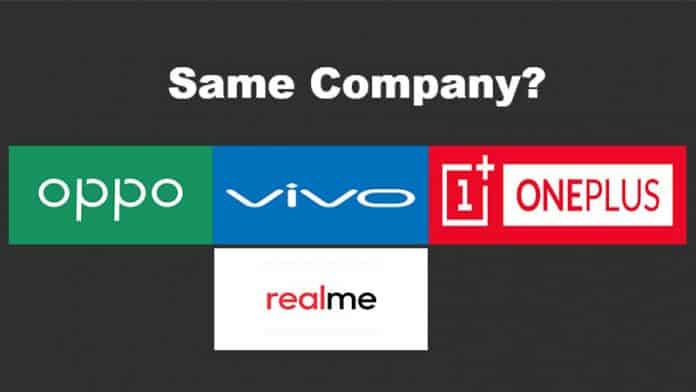 Yes, You might know these brands as a massive Competitor of each other but at heart, they all are the same.

BBK Electronics is also considered as the world’s 2nd-largest phone manufacturer company, (according to a report from 2017) which manufactures some of the fastest growing smartphones brands in Asia.

While Vivo and Oppo are wholly owned by BBK, OnePlus and Realme is technically a subsidiary of Oppo.

Meanwhile, BBK is about to launch a new brand by the name of imoo – targeted towards creating educational phones for the children.

With the massive manufacturing factories spread over 10 hectares of land and more than 17,000 employees, it’s safe to say that BBK has all the resources needed to tackle the management of four big smartphone manufacturing powerhouses.

“BBK Electronics Corporation is a Chinese multinational firm specializing in electronics such as television sets, MP3 players, digital cameras and cell phones too”.

They recently got popular in developing countries of Asia such as India, Pakistan, Bangladesh and also in developed countries like China itself.

The growing demand for smartphones in countries like India and Bangladesh may also result in maximum profits of BBK as they are making smartphones targeting the audience of those countries only.

Another contributing reason for their success in Asian Smartphone market is they are selling great smartphones at a very low price.

By this, we mean that they are providing great hardware and with easy to use software integration which doubles the experience of users using their smartphones.

Rest we have to look at what else they will do in the future.