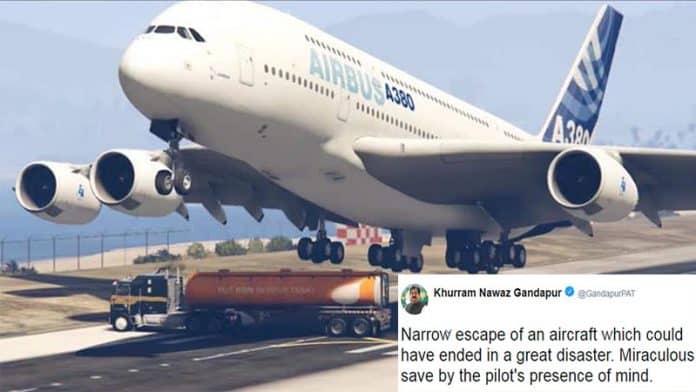 In yet another embarrassment to the Pakistani Government, a Pakistani politician publicly tweeted video footage from Rockstar Games’ Grand Theft Auto V (GTA V) assuming it for a real-life incident.

Khurram Nawaz Gandapur, Secretary General of the Pakistan Awami Tehreek (PAT) political party and a member of Pakistan’s Defense Committee, on July 5 shared a video of a flight narrowly avoiding a collision with an oil tanker while descending on the runway.

“Narrow escape of an aircraft which could have ended in a great disaster. Miraculous save by the pilot’s presence of mind,” his tweet said that was accompanied with a screenshot from the video.

However, he did not realize that the video he shared was a graphic simulation from the very popular action-adventure video game, GTA V.

The moment Gandapur’s tweet went viral, people started trolling him for his goof-up. The tweet has since been deleted but not before netizens online had a field day.

Here are some reactions:

Couldn't have been possible without the blessing of prophet (GTA5).

Hello, this is a simulation video. Such things aren't possible in real life situations. If so the KLM & Panam crash would have been avoided. You should learn about lift.

When you are not used to play GTA or other games or watch movies with good Grpahics ? https://t.co/yhXSEoYpRd

This is not the first time Pakistan has been the laughing stock on Twitter.

Recently, Pakistan’s Tehreek-e-Insaf (PTI) party live streamed a press conference on Facebook accidentally with the cat filter on making the faces of the leaders look like cats. Later, the party apologized for the incident and called it a “human error.”