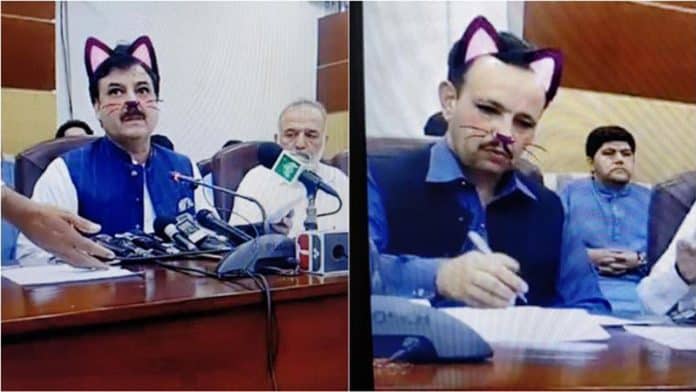 Twitter was left in splits on Saturday when a person live broadcasting press conference of a Pakistani minister, accidentally activated the Facebook cat filter, according to a media report.

Shoukat Yousufzai, Khyber Pakhtunkhwa’s Minister of Information, was speaking to reporters last Friday about local issues, when his party, Pakistan Tehreek-e-Insaf (PTI), started live streaming the event on Facebook to ensure all interested parties could witness the event.

The party’s Facebook page operator accidentally turned on the cat filter while streaming the video. As a result, when Mr. Yousafzai spoke, the cat filter popped up over a couple of ministers’ faces with pink cat ears, a kitty’s nose, and whiskers. However, a Facebook user pointed out the blunder and asked the administrators of the page to turn the cat filter off.

“Filter hata lo. Banda billi bana hua hai (Remove the filter, the man has been turned into a cat),” the user warned. Although the cat filter was immediately turned off, it was quick enough to become viral on social media.

“I wasn’t the only one – two officials sitting along me were also hit by the cat filter,” Mr. Yousafzai told AFP news agency.

In the meantime, PTI Khyber Pakhtunkhwa issued an apology on Twitter and called it ‘human error’.

“While covering a press briefing held by KP’s Information Minister Shoukat Yousafzai, a ‘cat filter was witnessed by the viewers which was removed within few minutes,” the PTI said in a statement.

“PTI SM Disciplinary committee probed the matter first hand and concluded the incident as a “human error” by one of our hard-working volunteers. All necessary actions have been taken to avoid such incidents in the future.”

Although the video was deleted from PTI’s Facebook page after the press conference, it did provide fodder for jokes on Twitter with memes and trolls on the video.

One user captioned the video by saying: “Who let the cats out”, while another posted: “Positive image of Pakistan is being promoted through a press conference streamed live on Facebook with cat filter on Ministers of KP province.”

What have this official PTI KPK Facebok page has done with KPK Information Minister Shaukat Yousafzai ? !
This is INSANE. @SAYousafzaiPTI pic.twitter.com/bttJt5FrdB

So this happened today when PTI's SM team forgot to turn off the cat filter while live streaming a press conference on Facebook. @SAYousafzaiPTI looks kinda cute pic.twitter.com/IjjJrua7DL