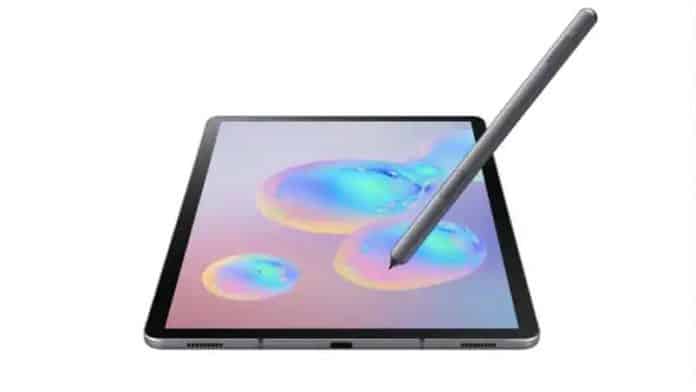 “Today’s inspiration comes at a moment’s notice and creatives and professionals need a device able to keep up with insatiable imaginations while complementing their busy, on-the-go lifestyles. Galaxy Tab S6 enables consumers to unlock their creativity while delivering the top-quality productivity features and advanced technology they have come to expect from Samsung tablets,” said DJ Koh, President and CEO of IT & Mobile Communications Division at Samsung Electronics.

In terms of specifications, the Galaxy Tab S6 comes with a nearly bezel-less 10.5-inch Super AMOLED display of 2560×1600 WQXGA screen at 287ppi and a 16:10 screen ratio along with an aluminum back. The display also features a new optical fingerprint scanner for maximum convenience and security. This tablet is incredibly thin at just 5.7mm, which is even thinner than iPad Pro.

The Galaxy Tab S6 is powered by Qualcomm’s latest flagship processor, the Snapdragon 855 (one 2.8GHz core, three 2.4GHz cores, and four 1.7GHz cores), which according to Samsung, renders graphics 60% quicker than the Snapdragon 835 in the Tab S4. The chipset also features a new central processing unit (CPU) that is considered 80% faster.

The newly added S Pen Air actions allow to intuitively control the tablet with hand gestures. Make presentations, control video playback and more without needing to reach for the tablet. The S Pen clips to the back of the tablet magnetically when not in use.

On the camera front, the Galaxy Tab S6 has a dual rear camera setup with a 13MP (f/2.0) primary sensor and a 5MP (f/2.2) ultra-wide sensor that has a 123-degree field of view. It has an 8MP (f/2.0) snapper on the front for selfies and video conferencing. The cameras are also capable of recording 4K videos and can playback 8K videos.

The Samsung Galaxy Tab S6 is powered by a 7,040mAh battery, which the company claims lasts for a full 15 hours of video playback depending upon the kind of usage. It comes with four quad AKG-tuned built-in speakers for rich and immersive surround sound along with Dolby Atmos support. However, there’s no 3.5-mm headphone jack here.

Samsung has also equipped the Tab S6 with a new version of DeX, dubbed “DeX3” that instantly lets your tablet transform into a PC. It also has a new DeX function key on the Book Cover Keyboard for easy launch along with USB Type-C port that supports outputting to an external display.

The Samsung Galaxy Tab S6 with Wi-Fi version will be available on September 6th in the U.S. starting at $649 for the 6GB/128GB model and $729 for the 8GB/256GB model with the S Pen included. The 4G LTE version of Samsung Galaxy Tab S6 is expected to arrive later this year. Further, the new keyboard cover will cost an additional $179.

The Samsung Galaxy Tab S6 will be available in three vibrant colors: Cloud Blue, Rose Blush, and Mountain Gray with pen color to match. Pre-orders begin on August 23rd and the tablets come with 50% off the Book Cover Keyboard if you purchase it before September 22.