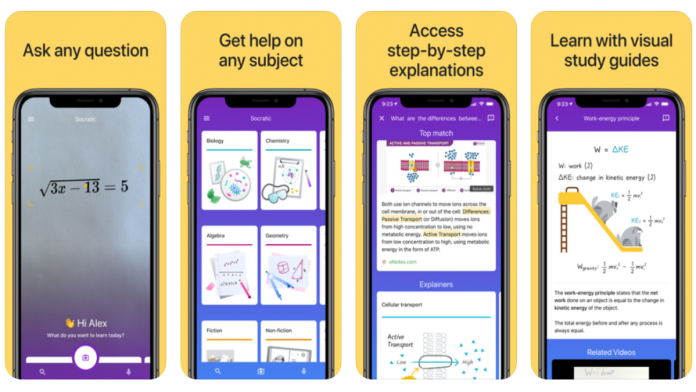 Socratic, a mobile-based learning app, has been re-released on the Google Play Store for Android devices with artificial intelligence (AI) backed enhancements. This AI-based app is designed to provide high school and college students everything they need in one place.

Socratic was initially released for Android in 2017, which was later acquired by Google in 2018 as a part of its ‘For Education’ program. However, the search giant removed it from the Play Store after purchasing Socratic and introduced its revamped version for iOS devices with ‘Google AI’ in August last year. Finally, Google has launched the same application for Android devices.

The fresh release of the Socratic app for Android devices was announced on the official Google for Education Twitter account on February 13, 2020.

Have you explored Socratic? It’s a Google app that uses AI to help high school and college students get un-stuck while studying. Today, Socratic is coming to Android with even more subjects and better help. Download the app and check it out: https://t.co/PaeXLuZt43 pic.twitter.com/HjkqASfdob

Currently, the app helps students in subjects like Algebra, Geometry, Trigonometry, Biology, Chemistry, Physics, History, and Literature. It allows students to use voice recognition or access the camera to connect to resources online for the academics-related questions and find answers by consulting videos, detailed explanations and more.

The Socratic app also allows students to take a picture of a question from their study materials. The AI then finds relevant material from across the web and shows the student how to solve it. Besides, providing in-house answers, the app also utilizes educational tools and YouTube to help students find relevant answers.

The app consists of over 1,000 topic manuals on high education and higher school subjects such as Biology, Physics, Algebra, Geometry, Fiction, and Non-Fiction. It supports 6 languages including English, Spanish, Indonesian, French, Portuguese, and German.

The app is supported by Android 5.0 and above and can be downloaded completely for free through Google Play Store, and on iOS through the Apple App Store.