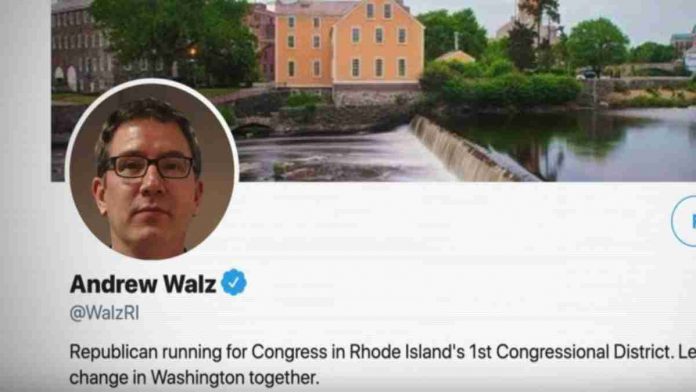 In the fake Twitter account, Andrew Walz’s bio reads, a “proven business leader” and a “passionate advocate for students” who is running for Congress with the tagline, “Let’s make change in Washington together.”

Earlier this month, Walz’s account received the coveted blue “verified” checkmark from Twitter, as part of Twitter’s efforts to verify the authenticity of many Senate, House and gubernatorial candidates running for office. Twitter gives “blue checkmarks” to let people “know that an account of public interest is authentic.”

Interestingly, neither Twitter nor Ballotpedia, which Twitter partners “to utilize their expertise in identifying the official campaign Twitter accounts of candidates” asked for identification or documentation to verify if Andrew Walz was a real candidate (or even a real person). However, the social media website did follow up after the teen requested verification, and asked him to add a background image to the profile.

The student, whose parents requested he remain anonymous, said he created the fake account because he was “bored” over the holiday break. He added that after learning about Russian interference in the 2016 U.S. Presidential elections, he wanted to test Twitter’s verification process related to election integrity.

“During Christmas break I was kind of bored and I learned a lot from history class, but also on the news they were talking more about misinformation,” the teen told CNN.

He told that it took him 20 minutes to create a fake website for his fictional candidate and then five minutes to make the candidate’s Twitter account.

“I had no malicious intent. I just wanted to simply test to see whether this could happen. So in case someone with bad intentions wanted to do this, Twitter now knows and can take steps to fix this,” he said.

Last year, Twitter was criticized for saying that it wouldn’t verify candidates running for public office unless they won a primary. However, in December, Twitter tweaked its policy and promised to verify all candidates who qualify for primaries in 2020 to help improve the information for voters on the platform.

“We’ve put into place a rigorous process to ensure that, through our partnership with Ballotpedia, we accurately identify and verify candidates’ legitimate Twitter accounts,” told a Twitter spokesperson.

The spokesperson further addressed the verification of the fake account, saying, “Unfortunately, an individual found loopholes in our process by submitting a fake candidate and a fake account for verification. As soon as we discovered this inauthentic behavior, we took enforcement action on the account. Attempts to abuse this system diminish the integrity of the election.”

“The creation of a fake candidate account is in violation of our rules and the account has been permanently suspended,” the spokesperson added.