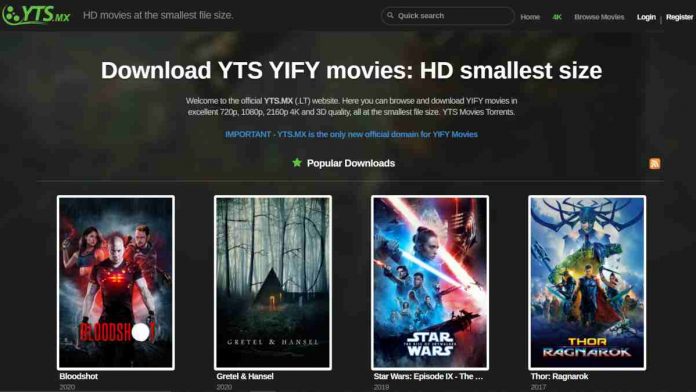 YTS, one of the most popular and largest visited torrent site on the Internet, has ‘settled’ yet another piracy lawsuit by agreeing to a consent judgment totaling $1,050,000 in damages, reports TorrentFreak.

Usually, when copyright holders file a lawsuit against pirate sites, their main mission is to shut them down permanently; however, some of those cases go into prolonged legal battles.

However, in the case of YTS, the torrent website has been allowed to stay online as long as it paid damages to the seven movie companies and ensured that their films were not listed at the torrent site.

This settlement method previously became public when Kerry Culpepper, an attorney from Hawaii, who works for Millennium Films, Voltage Pictures, and several of its daughter companies struck a deal between YTS and other movie companies.

According to the consent judgment signed at the Hawaii federal court a few days ago, YTS operator and an associated business have agreed to pay $150,000 to each company, which amounts to a total of $1,050,000 in damages.

The consent judgment lists a person named Senthil Vijay Segaran and the company Techmodo as the YTS operators. Segaran is the same person who in the past had agreed to remove several torrents linking to Millenium and Voltage Films’ movies from YTS.

Besides paying over $1 million in piracy damages, the judgment also prevents YTS’s operator from distributing and/or promoting torrent files related to the seven movie companies.

While YTS has removed the relevant movie torrents from the site, it continues to operate online as usual.

Nothing seems to have changed, as YTS still has hundreds of other pirated movies listed online. However, the site’s users continue to remain at risk of being sued although no new lawsuits have been filed in recent weeks.

Here is a copy of the consent judgment, signed by the YTS operator and the seven movie companies.